Worm Attack!!!!! The science behind composting

I am going to give my earth worms lettuce, banana,coffee grinds, bread and egg shell and I am going to determine the type of food that worms like to eat the best.

My hypothesis is that I think that the worms will prefer decomposing lettuce because lettuce easily breaks down in comparison to the other food types and has less fiber.  I believe egg shells will do the worst because it is a hard material and seems like it will take a very long time to decompose.

What are the best worms for composting?

Red wigglers are the best worms for composting

Worms prefer moist soil and mostly darkness. The soil should also be cool.  The soil should also be loose because the worms breathe through their skin. If the soil does not have organic material and nitrogen then the worms will be affected. The worms need organic material and nitrogen to live. Grass clipping can be added to the top layer of the soil to provide shade and nitrogen to attract worms. Shredded newspaper can also be used instead of grass clippings.

Vermicomposting is a process in which earthworms convert the organic waste into manure rich in high nutritional content.  Oxygen is added to the compost pile and water, heat and carbon dioxide is released into the atmosphere.  When the worms eat the organic matter, they poop out casings that are now part of the soil. The end result is organic matter, minerals, water and microbes.  Adding worm casings to your garden increases the nitrogen, potassium and phosphorus that can aid in the development of plants and vegetables. 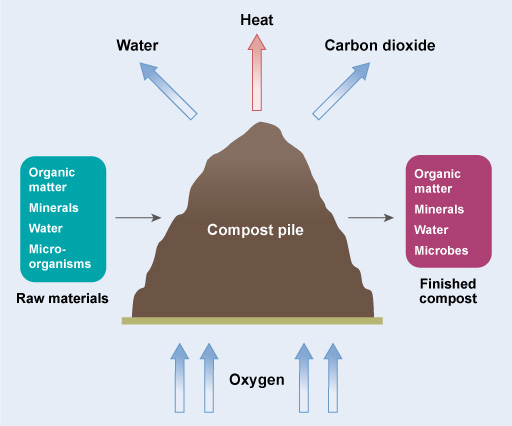 What is a worm's body made of?

Earthworms' bodies are made up of ring-like segments called annuli. These segments are covered in setae, or small bristles, which the worm uses to move and burrow through the ground.

What would happen if worms did not have setae covering their body?

If worms did not have setae covering their body they would not be able to make holes in the dirt to let the earth breath. If the earth can not breath then there is not enough oxygen available for beneficial microbes and the soil becomes anaerobic (no oxygen) and can give rise to harmful anaerobic bacteria.

How important are worms?

Worms are both important alive and dead. This is because, when worms are alive, they decompose and give nutrients to the soil. But when they are dead many animals such as birds eat them to gain nutrients.

Approximately how many worms are there on earth?

The containers that had the most change were banana and apple. The worms produced more soil, banana produced 30.4% more than its original amount apple produced 27.6% more.  Furthermore, both the banana and apple composted approximately 120%-140% of  the original amount, consistent with my findings that the apple and banana were the best composters.  Although the lettuce composted 140-160% of its original food amount, it did not translate to increased soil mass as the lettuce likely does not have enough energy to increase the soil weight.  The bread and the egg shell did the worst as they both did not increase the soil mass at all and also composted the least amount of food.  The coffee increased the soil mass (lots of energy) but the worms appear to not have composted as much of the coffee over the given time frame.  The weight and number of worms was inconclusive because I likely did not analyze the data for a long enough period of time to assess the reproduction of the worms in the given environment.  As seen in the pH analysis, coffee can produce a very acidic environment which worms typically do not like.  The initial soil for all samples was the most acidic followed by coffee, bread produced the most alkaline environment, apples, banana, lettuce and egg shell were all relatively neutral.  Typically vegetables and flowers prefer a neutral pH, the chart indicates that in most of the the case of the apples, banana, lettuce and egg shell the worm casings served to increase the pH of the soil appropriately.  The Nitrogen, Potassium and Phosphorus results were somewhat unusual.  The initial soil was the most depleted which is to be expected, but the apples and bananas produced the most Potassium but  the lettuce and bread produced the most Nitrogen and Phosphorus, likely indicative of the nutrients that make up the individual food type. 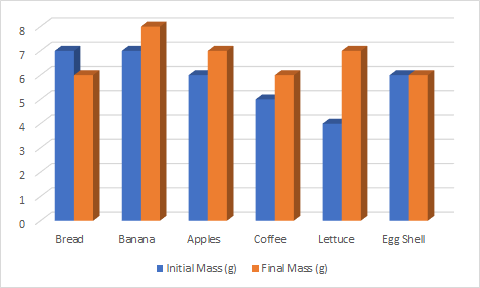 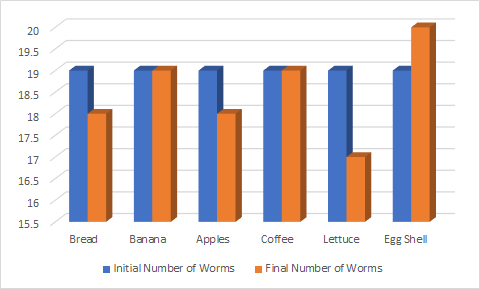 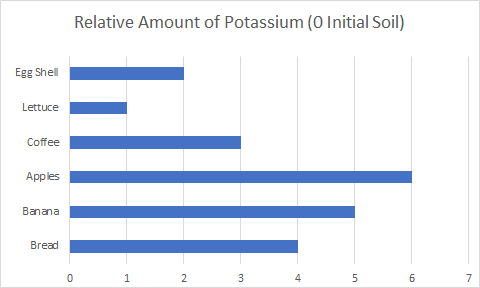 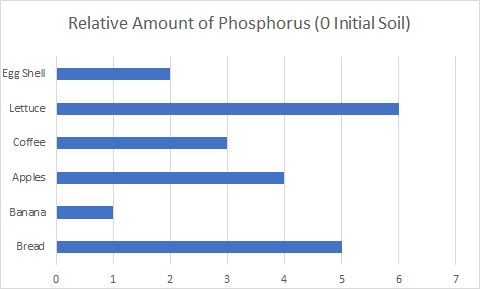 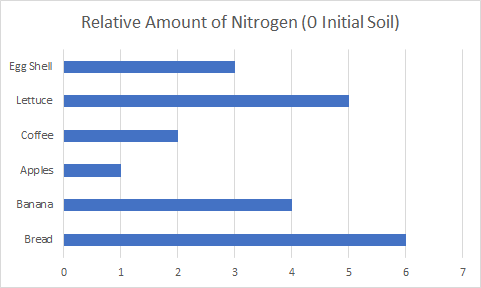 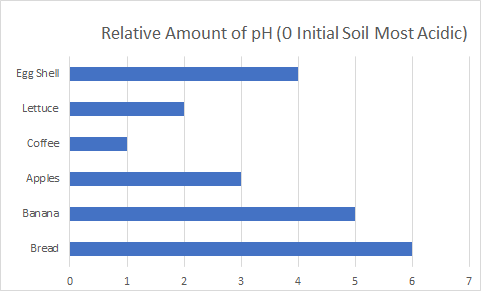 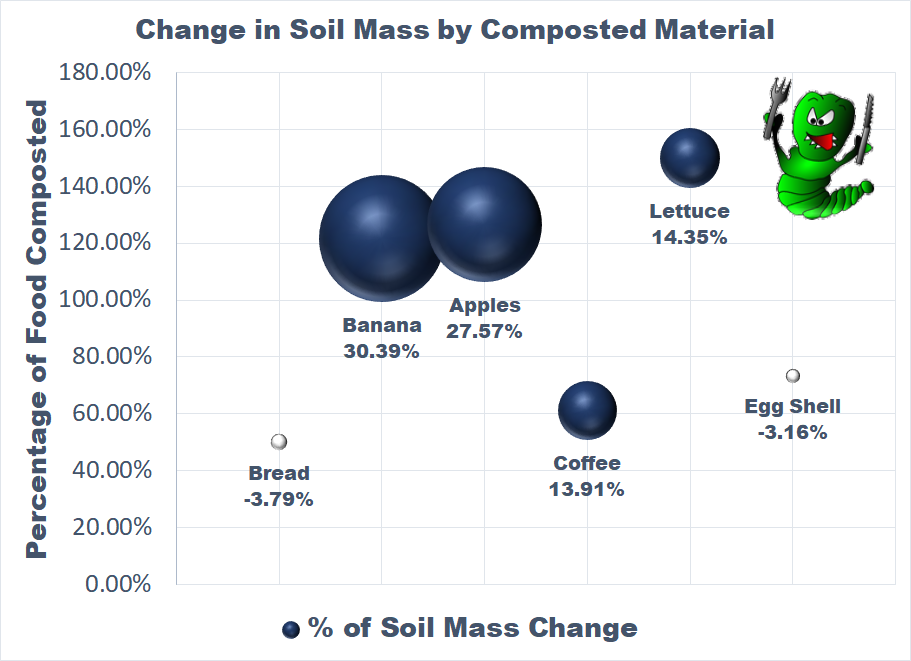 In conclusion the containers that had the most change were banana and apple. They produced the most soil and those containers also composted the most food.  The apples and banana also increased the Potassium levels the most and produced pH neutral .  The soil was enriched to the point where it felt silky. They worms continually ate the food resulting in me having to put more food in one week. The coffee grinds and the bread did the worst because the coffee grinds are very acidic and worms do not like acidity.  They were not able to increase the soil mass and composted the least amount of the food.  Although the lettuce decomposed easily, there was not enough energy in the lettuce to increase the soil volume.

Worm casings can help everyone from large scale farmers to individual gardeners produce quality nutrient dense fruit, vegetables and flowers.  Knowing what types of food that work best in vermicompost can improve the gardening and farming experience and produce quality organic at a cost effective price.

The experiment could have used a bit more time to ensure that the worms had a sufficient time to both reproduce and to produce additional casings.  In addition, I would have liked to have a higher quality scale so that the weight measurements were a bit more precise.  The soil analysis could also have been a bit more precise.  I was comparing colors on a chart rather than absolute numbers.  This is why I did a relative comparison versus the actual number.

Sister because she heped me find a project that was in my interest.