The effects Exercise has on the Heart

The heart is a very important.It’s the organ that transfers blood throughout your entire body. Also doing exercise makes your heart healthier. So I will be measuring different people’s heart rate as they complete different exercises.

Hypothesis 1: Running will increase the heart rate the most out of all the other activities.

Hypothesis 3: As the body position changes, so does the heart rate.

Research: The heart is a very essential organ in your body.  The heart affects everything in the body. It pumps blood around the whole body. How does it do all of this? Well how it works is the heart is separated into two parts. The right side of your heart has the right ventricle and the right atrium. The right side of your heart is where it takes the blood that doesn't have as much oxygen then pumps it into your lungs. Which then sucks up the oxygen and disposes of the carbon dioxide. The left side of your heart takes the blood from the lungs and transfers it throughout your whole body. The second part of my topic is exercise. As studies have shown exercise is very important to be healthy. Exercise is very good for not just your physical health but also for your mental health.  According to Kaiserpermanente.org, it makes the heart way more efficient. How this is, is because the stronger and more efficient the heart becomes it will be able to pump more blood throughout the entire body. This means that one beat will pump more and more blood for the body. How exercise is good for your mental health? Well, when you do exercise it reduces depression. As well as anxiety and self-esteem. Including many more. You will also feel more and more energized as you do even more exercise. These are just some of the many benefits that exercise can do for your cardiovascular health and psychological health.  For my project, my question is How Does Exercise Affect the Heart? My manipulated variable is using different people. This is going to be a key part of my project. That is why this would be my responding variable. This is because people do different things so therefore all of the hearts are going to be most likely different but similar. My constant variable would be that all of the exercises stay the same. The people will change, the heart rate will change but not the exercises. There are five activities I will be accomplishing.  Two out of the five will be running and walking. My hypothesis will be that when running your heart rate will go up more drastically than if you were just walking. Some interesting facts. The average size of a heart is actually the size of an adult’s fist. Some others say that the beating noise that you hear from your heart is actually caused by the valves of the heart opening and closing. Did you know that laughing is good for your heart? It reduces stress and gives a boost to your immune system. The bottom line is that the heart is very crucial to your survival.

Manipulated Variable: For this variable, I will be using different people to do all of my exercises.

Responding Variable: For the responding variable, it would be different but, similar results from all the different people.

Constant Variable: the constant variable is that even though there will be different people and the exercises will be the same.

Step 1: Go over to Fish Creek to start the experiment

Step 3: After one rep I will be checking their fitness tracker watch to see their heart rate.

Step 4: They will be doing this 3 times.

Step 5: After all exercises, I will look at all their heart rates from all the reps and see what the average is.

Step 6: I will look at all the kid's and adults' heart rates to see what the average is for the kids and for the adults.

The following data were collected from the 20 subjects for the analysis. The data has been divided according to the following criteria to show the various activities and their corresponding heart rates: 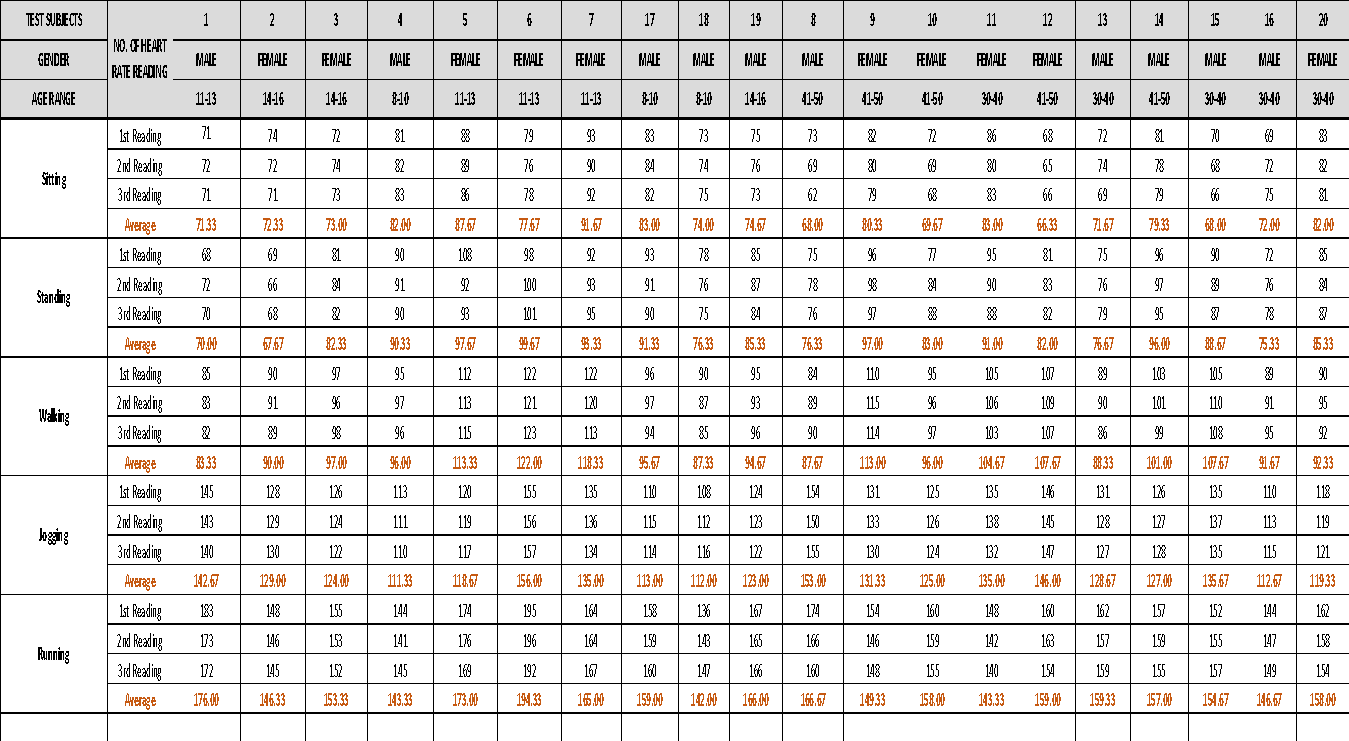 Table 2: Heart Rate with activities for the male gender 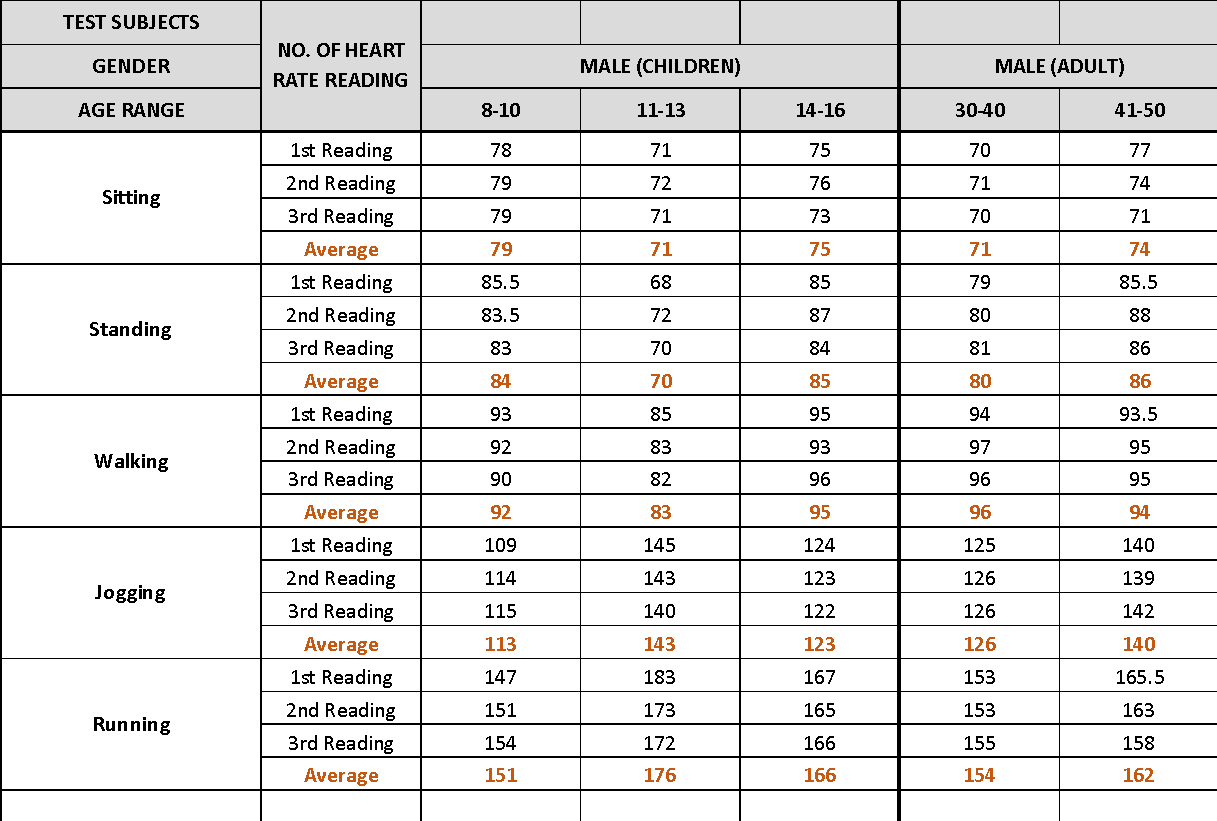 Table 3: Heart Rate with activities for the female gender 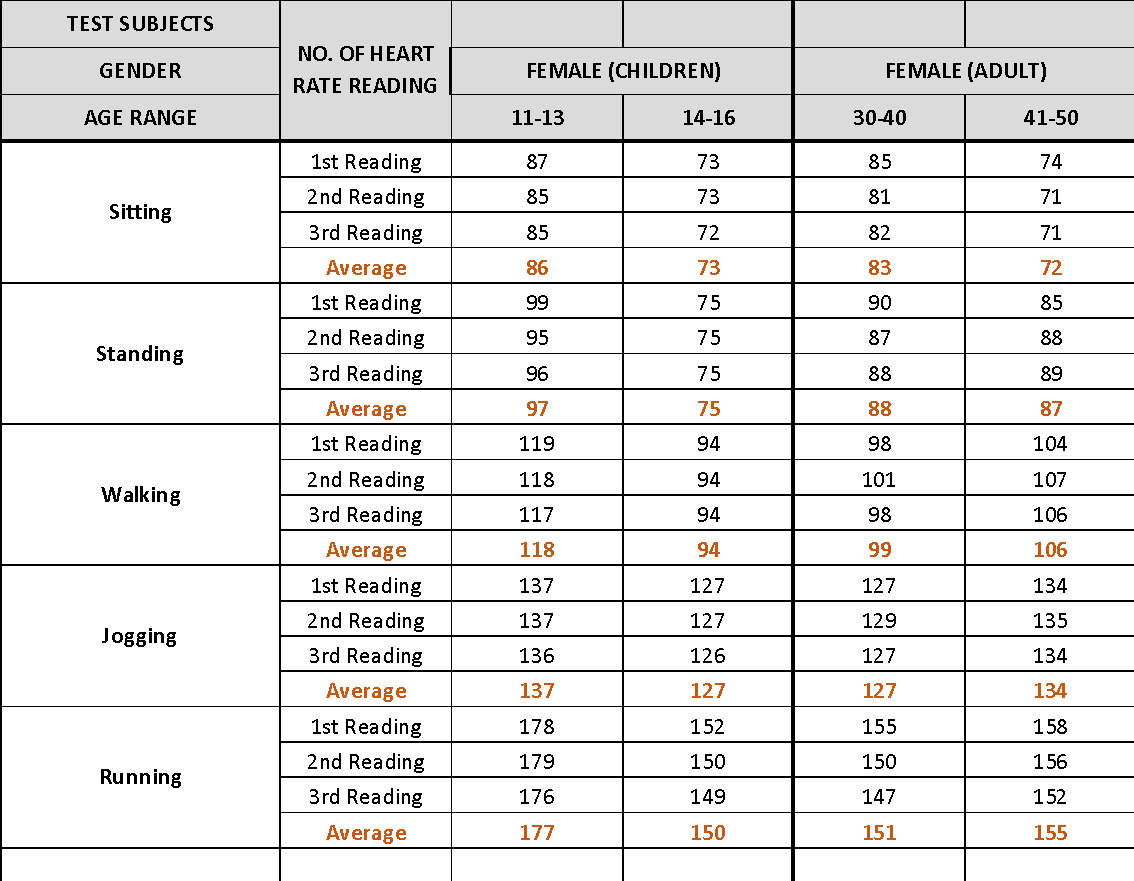 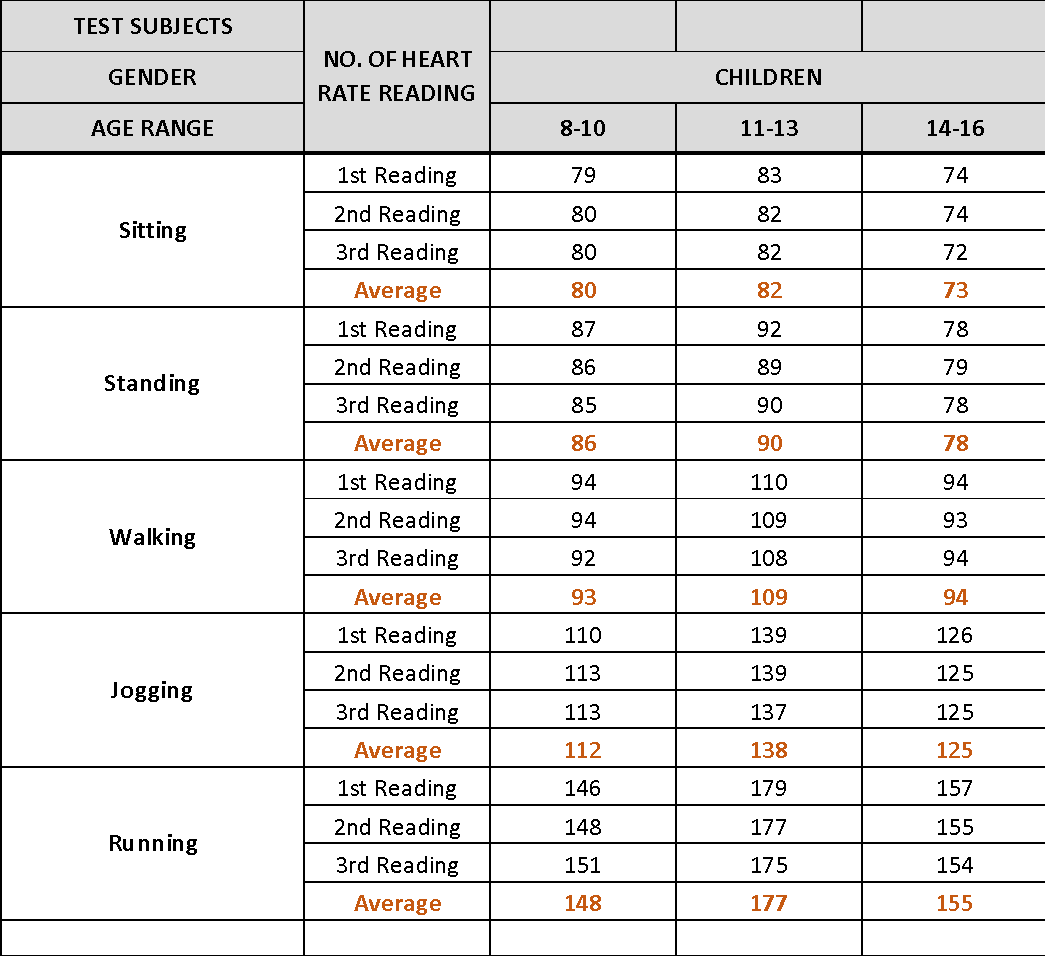 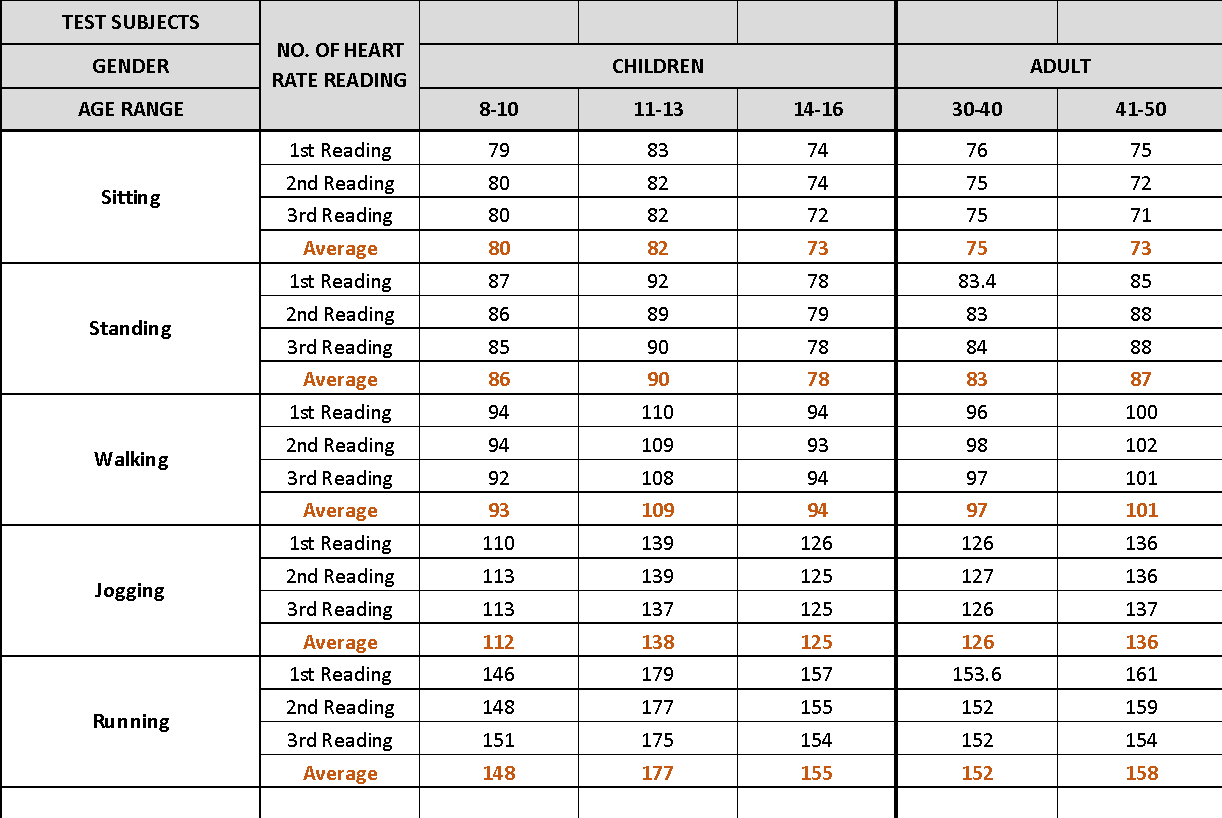 In this part of my project, I will talk about central tendency values, mean, median, and mode of children vs adults based on the BPM data presented in table 4.

The median is 75 because it’s the middle number of the 5 data values.

Mode: The most commonly occurring number

In view of the data that I collected for this experiment; my first hypothesis was correct. For every person that has participated in the project, running had the highest heart rate when compared to other activities.

In conclusion, to answer my scientific questions, which says “what effect does exercise have on heart rate”; I have concluded that as the exercises become more intense the heart rate increase. Also, age, body position, and the type of activity being carried out will also have an impact on the heart rate.

Exercise is good for the body and in order to make sure that we get the very best from exercising or one’s workout session, it is important to know the safe zone and monitor how hard your heart is working. In a sitting position which is the resting position, if your heart rate is higher than normal, it can be an indication that something is wrong.

One area of improvement would be to have a wider range of age groups to include a lot of people in order to get a wide range of data set.

I would like to thank my parents for letting me join CYSF. I would also like to thank TCS for this opportunity. I also thank all of my friends and family for participating in my study to make all of this possible.