Egg science: about the eggs

A presentation about value of different kinds of bird eggs, including diet( of the bird) , price, rarity, nurtitional value, and more.

The problem is that chicken eggs have fatty oils and lots of calories. Too much of these can increase chance of illnesses such as heart disease, stroke, chronic disease, and even, in some cases, cancer. Even though it has a lot of nutrition, if we could find an healthier alternative, we could change the food and health industry for the better.

I will research information that may be supportive, and then organize it into sheets and charts. Separating useful information makes it easier to read and comprehend. Afterwards, I will organize the health data into a chart, directly comparing them to find the solution.

(note: listed from smallest to largest)

A quail egg is so small; it takes five of them to equal the size of a standard chicken egg. In fact, the average quail egg is only about 3 cm tall and 2.5 wide! But even though they are small, quail eggs have a surprising amount of nutrients (although you would have to eat a lot to compensate for their size). A quail egg has a bigger yolk to white ratio than a average chicken egg. Usually, quail eggs have an average weight of 10 grams, which is about the weight of 10 paper clips. Quail eggs have an interesting speckled brown pattern. At the store, quail eggs are slightly more expensive, but by not much. You can expect around six dollars per dozen. 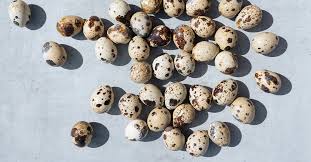 Pheasants are related to peacocks, which might explain the extravagant colors.  Their eggs are medium-large, measuring up to roughly the size of a duck egg. Compared to a chicken egg, pheasant eggs are higher in protein, but lower in fat and calories. In the wild, their life span is 3 years (averagely), but in captivity they can live much longer. Pheasants are classified game, as they are exceptions to wild birds.  Pheasant eggs are quite rare to find in grocery stores, but private farms or farmers markets carry them occasionally. 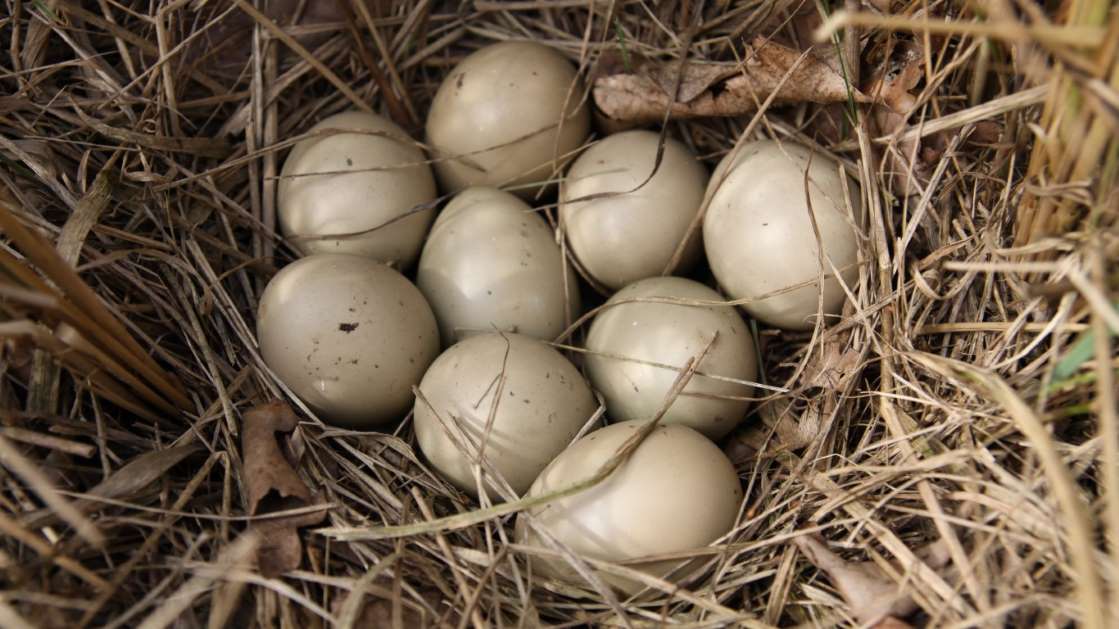 Chicken eggs are quite good for you as there are tons of nutrition and vitamins like vitamin A, C, D, and  B-6 in them. Chicken eggs also have Calcium, Iron, Cobalamin, and more. There are two common colors of eggshell: white and brown. But on the inside, they look pretty much identical (although you can get different colors of eggs, like blue and green, with other different colors of interior). A typical egg weighs only about 50 grams. They are also quite cheap, and a dozen eggs would cost around 3-4 dollars. They are the most cost efficient, mostly because of it's rareity. 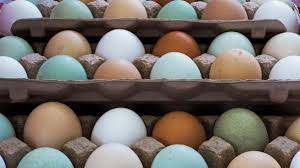 The exact size of a duck egg varies but is usually around 50% bigger than a jumbo chicken egg. Like the chicken egg, duck eggs also come in different colors, including green, shades of grey, black, and blue. Duck eggs are typically white. Duck eggs have slightly more nutrition than chicken eggs, partly because they are a little bigger. Duck eggs taste like a robust and amped-up flavor of a chicken egg because of the duck’s diet. The average duck egg weighs about 70 grams. Duck eggs are also more expensive than chicken eggs. Duck eggs are priced at about 6-12 $ per dozen, mostly because they eat more and are less convenient to raise. I managed to get ahold of one. It weighed 86g ; and measured 15 cm in diameter. The egg also had about 7 cm for height. 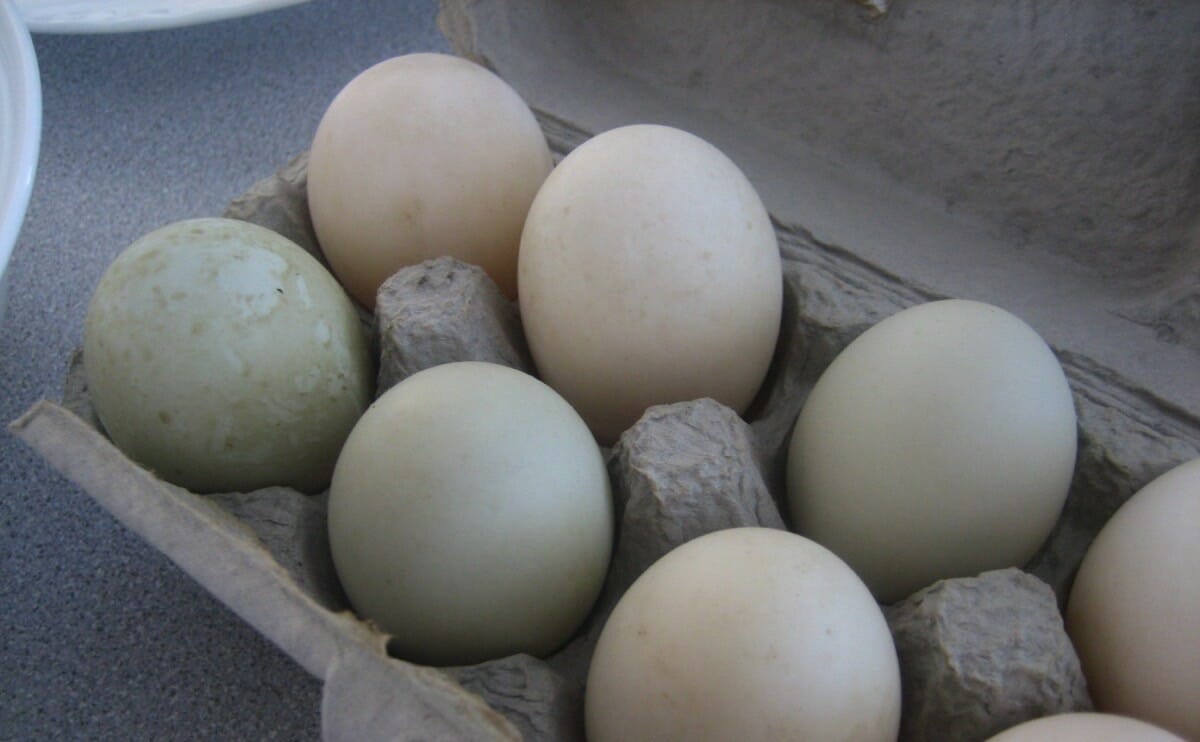 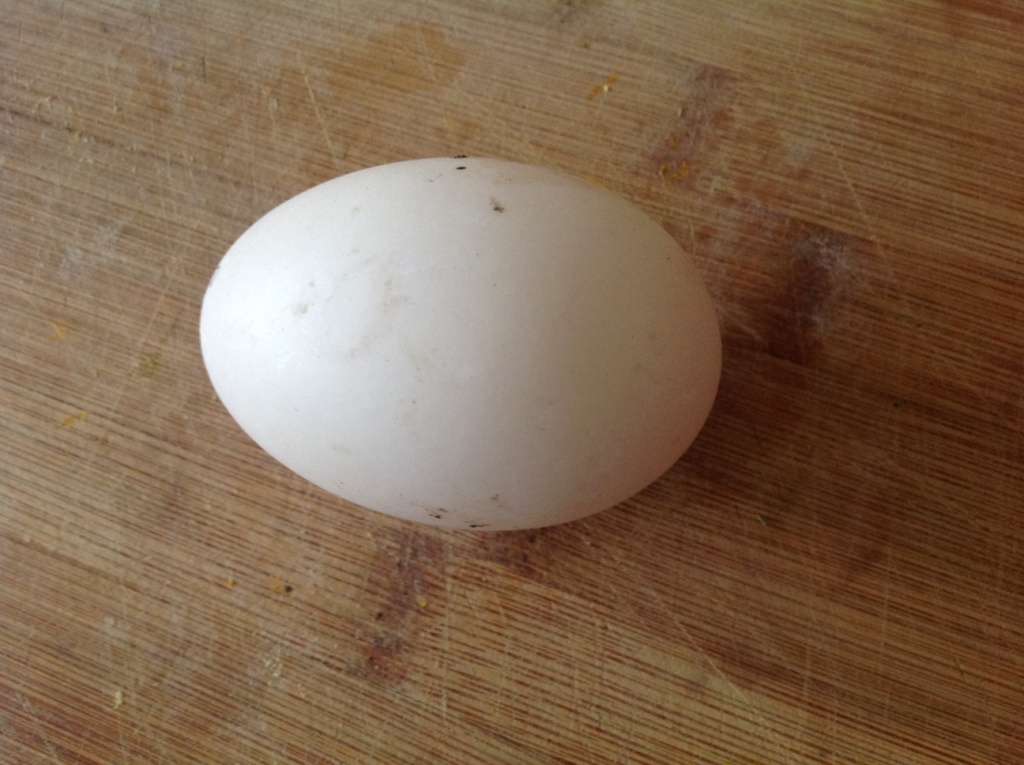 Goose eggs are about three times bigger than chicken eggs. Although they look quite similar, goose eggs are more expensive because they are bigger, a delicacy, and that geese lay only 40 a year. They are also more abundant in nutrients and heavier. Like duck eggs, goose eggs also have a stronger, eggier flavor. The yolk One reason for the strong taste is that they are mostly fed on pasture, resulting in a richer diet that affects the flavor and color. Goose eggshells are also quite a bit harder than chicken eggshells, requiring more force to break them. They are typically 3-4 inches long. I also got one of these, and it weighed 169g ( considerably heavier than the duck egg) . It's cifcumfrence was 19 cm and height was 10 cm. 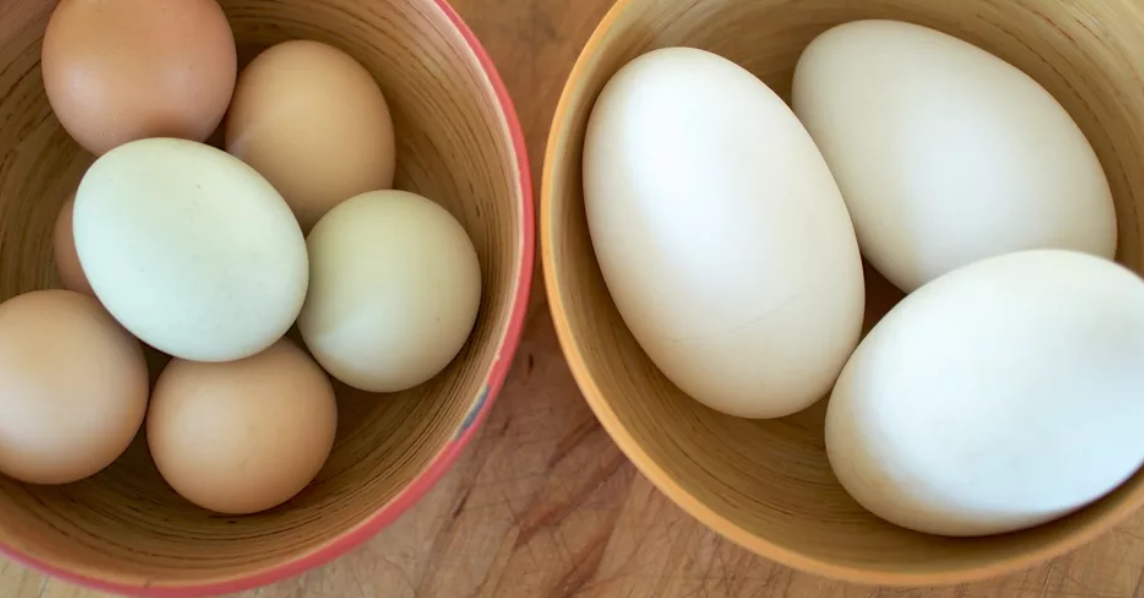 Emu eggs have a peculiar color and speckled pattern, most likely being the result of natural selection and camouflage purposes.  It is the second largest species of bird, second to only it’s relative, the ostrich, and is native to Australia. They are herbivores, which means they eat mostly vegetation. They run at extremely fast speeds, around 50 km/h. Emu’s cannot fly, for they lack the pectoral muscles to lift themselves into the air. Because of this, they are classified in a group called the ratites. Emu’s incubation period is 56 days, or roughly two months. The nest is built on  the ground, unlike many other species of birds. 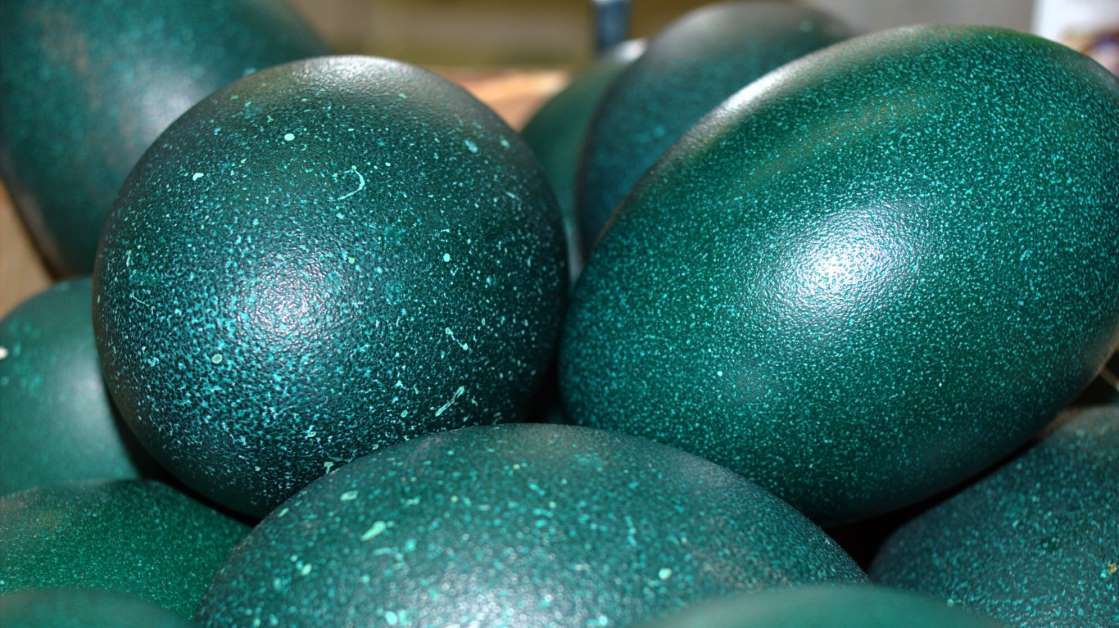 One ostrich egg is equivalent to the size of 24 chicken eggs. The eggshell is about as thick as a cup or mug and takes a lot of force to crack. The shells of an ostrich egg are a slight cream color. Once cracked, the egg inside is quite similar to that of a chicken egg, except much larger. Like the goose and duck egg, it also does have a slightly bigger yolk to white ratio. It takes a long time to cook one, and the flavor is said to be slightly buttery. Ostrich eggs are the largest size of egg that is naturally made. Ostrich eggs are often used for gourmet banquets where there is typically more guests. 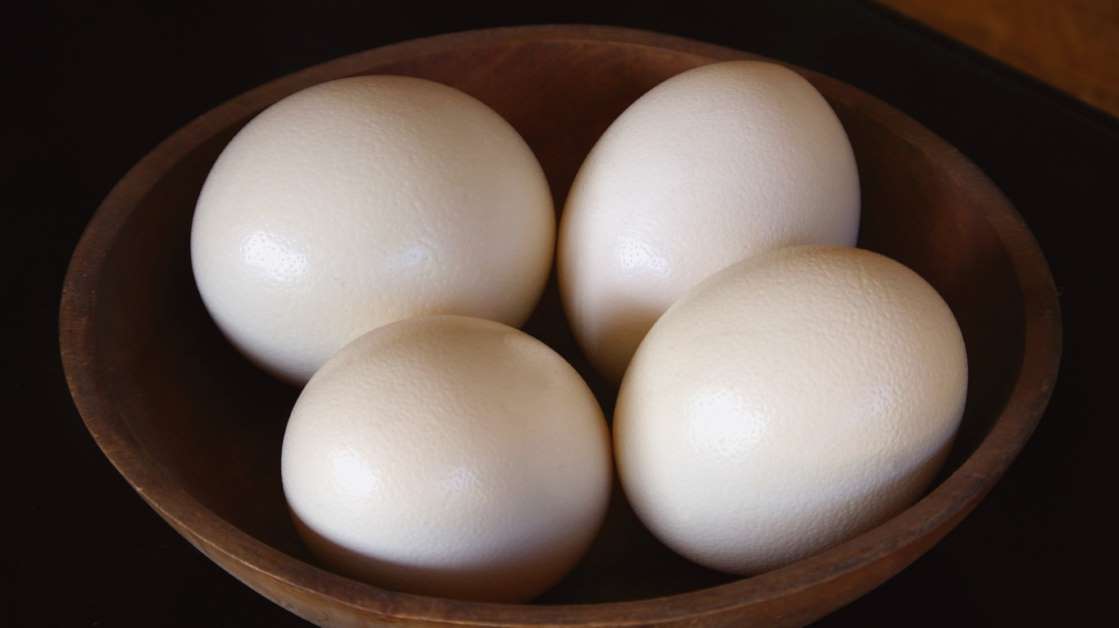 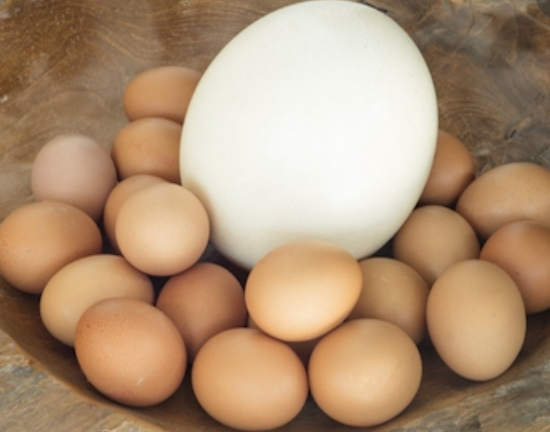 Quail: Relatively low in fats and calories, although the nutrition content is quite large.

Pheasant: Much higher in calories and fats, but are still very nutritional.

Chicken: High in nutrition, but as i mentioned before, calories and fatty oils make need of a substitute.

Duck : Quite average statistics, but a slightly larger quantity of calories and fats.

Goose: The goose egg has an extremely high quantity of fats for it’s size.

Emu: Second-largest in both size and calories.

Ostrich:  Not surprisingly, the highest in calories. This is most likely because of the size and ratio.

This concludes my presentation. I hope you learned a lot about what you never thought to explore! Thanks for reading!

Christensen, E. (2019, May 02). A Giant Among Eggs: Goose Eggs. Retrieved from https://www.thekitchn.com/a-giant-among-eggs-goose-eggs-ingredient-spotlight-176552