Comparison of the sense of direction between males and females

An experimental project that will determine whether males have a better sense of direction than females. The study will be limited to the individuals that are in the grades of 7, 8 and 9.

What is the “sense of direction?” It is your conscious awareness of your surrounding space, and where you are. The sense of direction is generally defined as the ability to know one's location and perform wayfinding. You may notice some people are able to find their way around better than others. So, what is it exactly influencing this? One possibility is that it is controlled at birth, that is to say that it is determined based on genetic predispositions. Another possibility is that sense of direction is not a sense, but rather a skill that is acquired based on experiences, practice, and activities, that we carry out. On top of this, there is the stereotype that males are better than females at navigation. From the research I have done, there is evidence that genetics, activities, as well as hormonal changes may be important in determining the goodness of sense of direction. Amongst  all these factors, I selected the one that was the most intriguing to me: I formulated my hypothesis on the basis that the sense of direction varies based on gender. While there is research suggesting that gender affects the sense of direction of an individual, I feel there may be a bias, and the results sometimes may be a self fulfilling prophecy. When designing my experiment, I obviously focused on gender, but I also took into account other factors that are known to influence the sense of direction.

In part one of the test, testing visual spatial skills, I had nine questions. The first three of which are sometimes categorized as “reasoning questions”. In these questions people were given instructions as if they were traveling from point “a” to point “b”. They were then asked to locate point “b” in respect to point “a”. In the remaining six questions, they were given a picture with eleven different objects. The task was to locate one object with respect to another. For the entire duration of this part of the test, participants were asked to carry out the exercise mentally, they were not allowed to scribble, or make notations.

In part two of the test, a visual search task, participants were given a maze to solve.

When preparing my test, I first assessed a few people with drafts of what would soon become the final test. I did this to get feedback on the length of time that the test would take to complete, the degree of difficulty (too easy or too difficult), and it helped me prepare instructions when administering the test to a larger group of people.

Part of the Brain Behind the Sense of Direction

There are many parts of the brain associated with sense of direction, but the most commonly referred to is the hippocampus. This is because most of the neurons associated with sense of direction are found here. The hippocampus plays an important role in short term memory, long term memory, and spatial memory which enables for wayfinding and navigation. Humans have two hippocampi, one in each hemisphere of the brain. They are both located at the front of the cerebrum. The Brain Cells Associated with the Sense of Direction

Within the hippocampus, neurons associated with the sense of direction have been classified into different categories: place cells, grid cells, head direction cells, and boundary cells. Place cells were first discovered by John O'Keefe and Jonathan Dostrovsky in 1971 when they were working with animals studying spatial skills. What researchers have found is that the collection of neurons makes for what is called a cognitive map.

Gray Matter: Does it Matter?

As you use your navigation skills, your brain changes. Specifically, the gray matter is increased, and your sense of direction improves. A good example of this can be found in a study carried out with London taxi drivers, published in the Scientific American in 2011. Gray matter makes up about 40% of the brain. It contains most of the brain's neuronal cell bodies, and serves to process information. Generally, it becomes fully developed when a person reaches their 20’s.

There are researchers who study genetic predisposition and disorders associated with wayfinding. For example Giuseppe Iaria at the University of Calgary is studying Developmental Topographical Disorientation (DTD), a disorder meaning people have no sense of direction to the point where they get lost in their own house. These people have never developed a cognitive map through their experiences. Genetic predisposition is critical in these cases, but researchers have found that it is not static, and can improve. Another important research group is one at University of California, Santa Barbara, who are interested in spatial thinking and quantifying sense of direction. The research on this topic serves multiple purposes, from treating disorder, to orienting yourself in space.

A visual search task is when one is looking for something. In real life, an example of this would be looking for a broken bone in an X-ray, or looking for a specific key when learning how to touch type (University College London Press, 1998). A visual spatial skill consists of visualizing a specific space, and being able to orient yourself through that particular space by using, and understanding meaningful patterns (https://profectum.org/).

How to Improve the Sense of Direction

There are many ways in which to improve your sense of direction. The Cut, 2018, suggests that practising wayfinding is an excellent way of doing so, it exercises your cognitive map, and if you do it enough, enlarges it. You can also make an effort in locating and memorizing landmarks. Using less GPS and other mapping technologies also makes a difference, as they make you lose the practise necessary to maintain navigation skills. Many people even suggest that being more physically active may help. 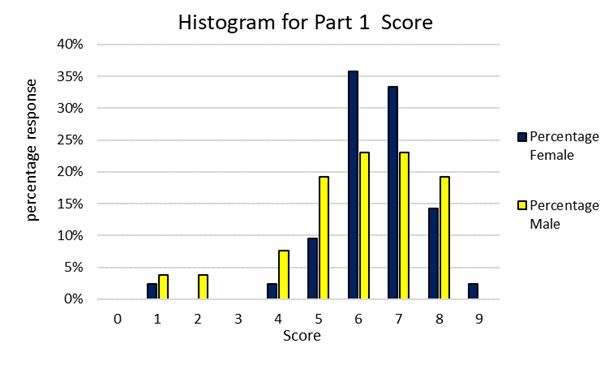 From the average scores summarized in the table above, we can clearly see that females obtain a better score compared to males on the questionnaire that tested visual spatial skills. However, when we look at the distribution of data represented in the graphs, there is a large spread in the results for both males and females. I have also noticed that females take a little bit longer to complete the test. I investigated to see if there was a correlation between the score and the time that people chose to take when answering the questions. The graphs and trend lines show that the score tends to get better as people take more time, though, the correlation is not strong. 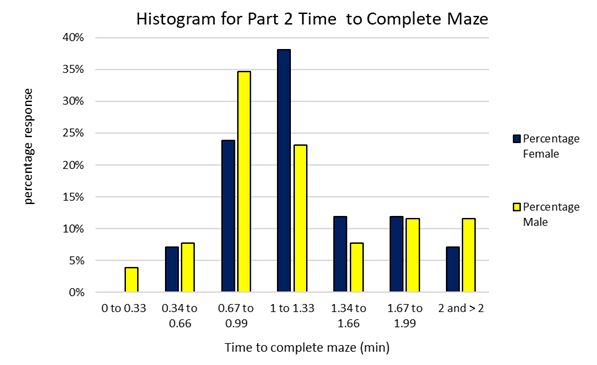 The average time required for males and females to complete the maze is the same. Be that as it may, this is a case where the average does not accurately portrait all of the results. The reason for this is that there is a slightly bigger distribution for males compared to females. When I look at the median and the mode, there are differences between the males and females; females took longer to complete the visual search task than males. 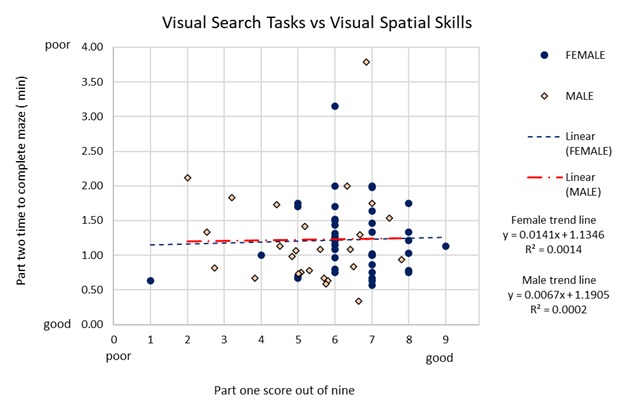 The next question I had was whether there is a correlation between having good visual spatial skills and having good visual search skills. The graph above combines results from both tests. Data points closer to the top left corner represent a poor performance in both skills, while data points closer to the bottom right corner represent good performance in both skills. This graph shows the data points to be more or less random, which suggests that there is no correlation between the skills in the way I tested them.

Lastly, when looking at the physical activities as well as the mode of transportation and use of mapping devices, it was difficult to see any correlation between test scores. The only exception to this is the effects of male physical activities in which those who reported more hours per week tend to have a lower score for visual spatial skills. This goes against suggestions I have found in my research on how to improve sense of direction.

My hypothesis stated that the sense of direction would vary based on gender. Overall, my data does not support this statement. On one hand, when quantifying visual spatial skills, I found that females scored better than males. On the other hand, when testing visual search tasks, on average males performed better than females. The difference is not very large, and there was a bit of scatter in the data.

Looking back at the way I designed my test, it had to be short enough as to encourage a large number of people to participate. However, part one may have been too challenging, while part two may have been too easy. If I could do it again, I would want to maintain at least the same number of participants, and I would have designed the test in a way that allows me to differentiate better between a good score and a bad score. For example, in the visual search task, most of the participants completed the test within less than two minutes. If perhaps there were any distractions for a participant, that would have greatly influenced their score. Next time, I would look for a range of multime mazes that would range from easy to difficult, to better assess their skills and minimize influences of external factors. As for the questionnaire that assessed visual spatial skills, I realise now that the wording in some questions may have been confusing, and thus testing reading skills and not as much spatial skills.

S. Makin (2015) “The Brain Cells behind a Sense of Direction” Scientific American https://www.scientificamerican.com/article/the-brain-cells-behind-a-sense-of-direction/?print=true

Dr. Pascale Michelon (2013) “Brain Game: How is Your Sense of Direction” The Memory Practice http://www.thememorypractice.com/?p=2535