I will drop alka seltzer tablets into water of different temperatures and study the rate of the reaction. I want to find out whether it reacts faster in hot, cold or room temperature and why.

I researched that heat transfers energy into molecules (in this case water) will move faster and they have more contact with the other chemical/s(in this case sodium bicarbonate and citric acid) meaning that the chemical reaction speeds up.

I also researched that mixing water and the ingredients of an Alka Seltzer tablet will have a reaction of carbon dioxide gas and water and sodium citrate.

The process will be recorded to show the stopwatch and the reaction. The tablet should be dropped in each jar at the same time as well. Then I have to wait for the reaction and note the rate of reaction for each jar. This information will be gathered from the video of the reaction.

I observed both physical and chemical changes occurred during the reactions. A solid tablet is dissolved in liquid water to release a gas called carbon dioxide. I have recorded the temperature and time in the tables below. 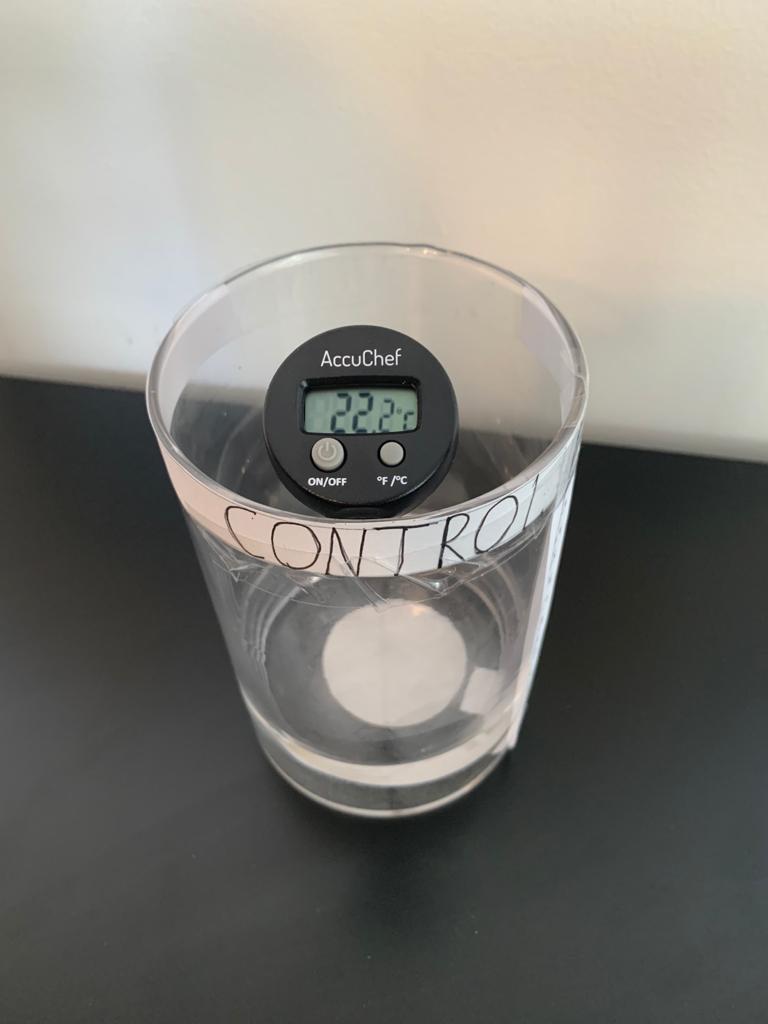 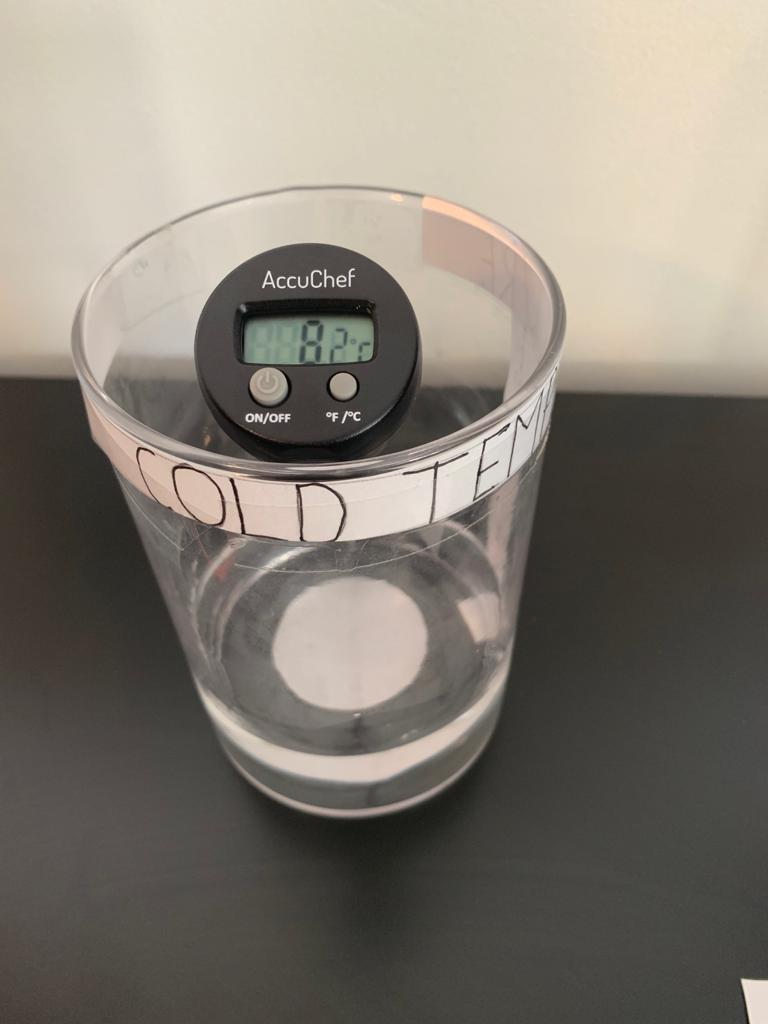 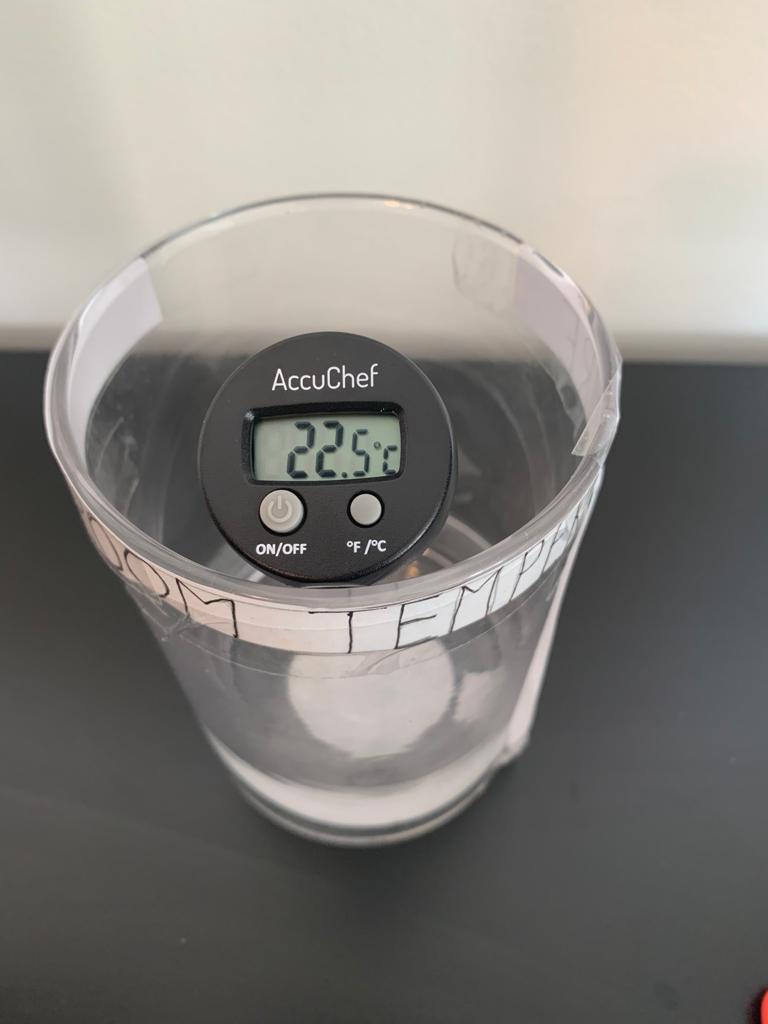 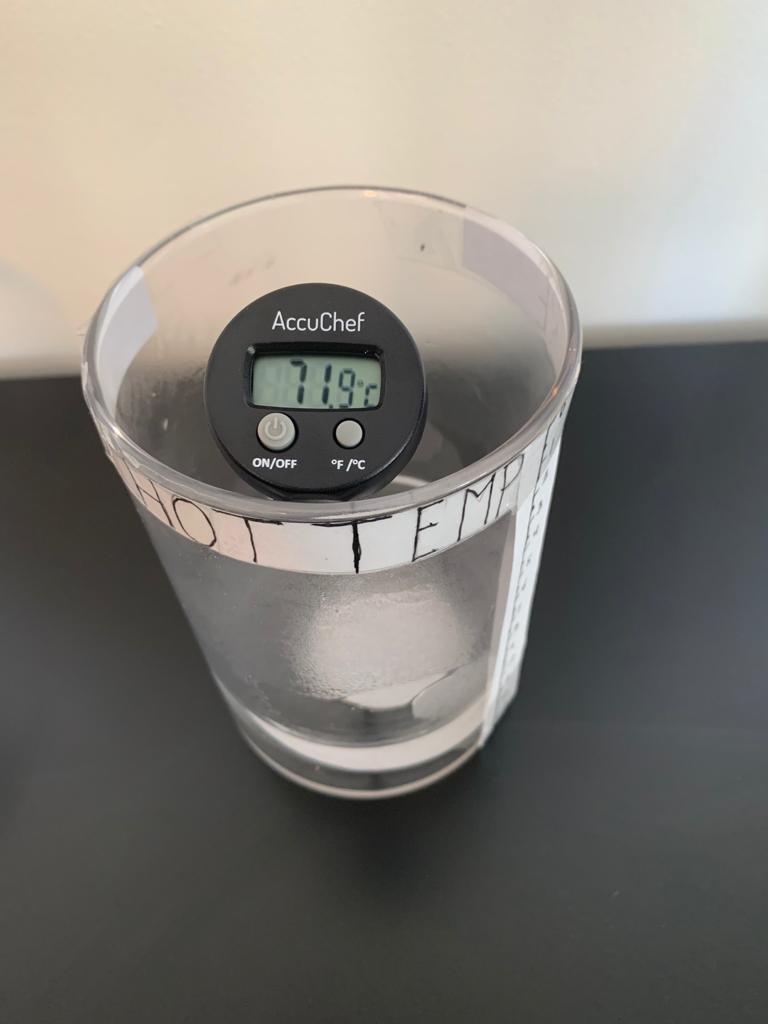 Carbon dioxide is released as a product of the reaction I had to come up with a method to measure the amount of carbon dioxide released. Therefore I used another parameter which is "how high do the carbon dioxide bubbles float up?"

I observed the carbon dioxide bubbles but they didn't reach above the water and hence I was unable to measure the height. In addition, the tablet is completely dissolved in hot water whereas it was not the case for room temperature water and cold water. 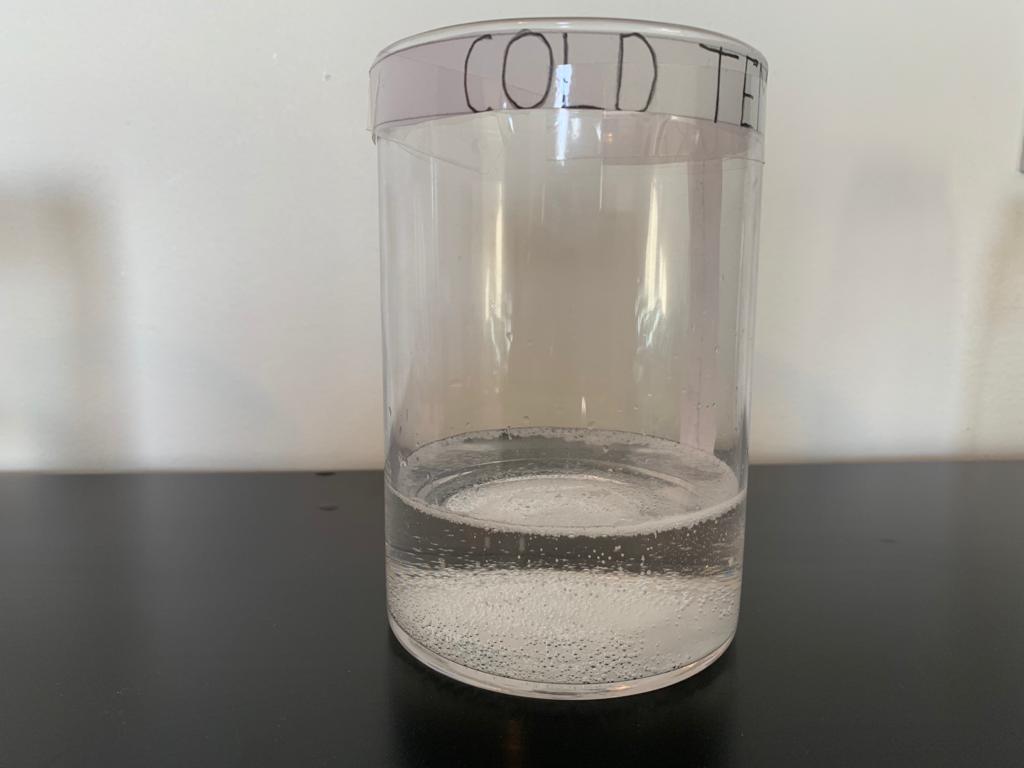 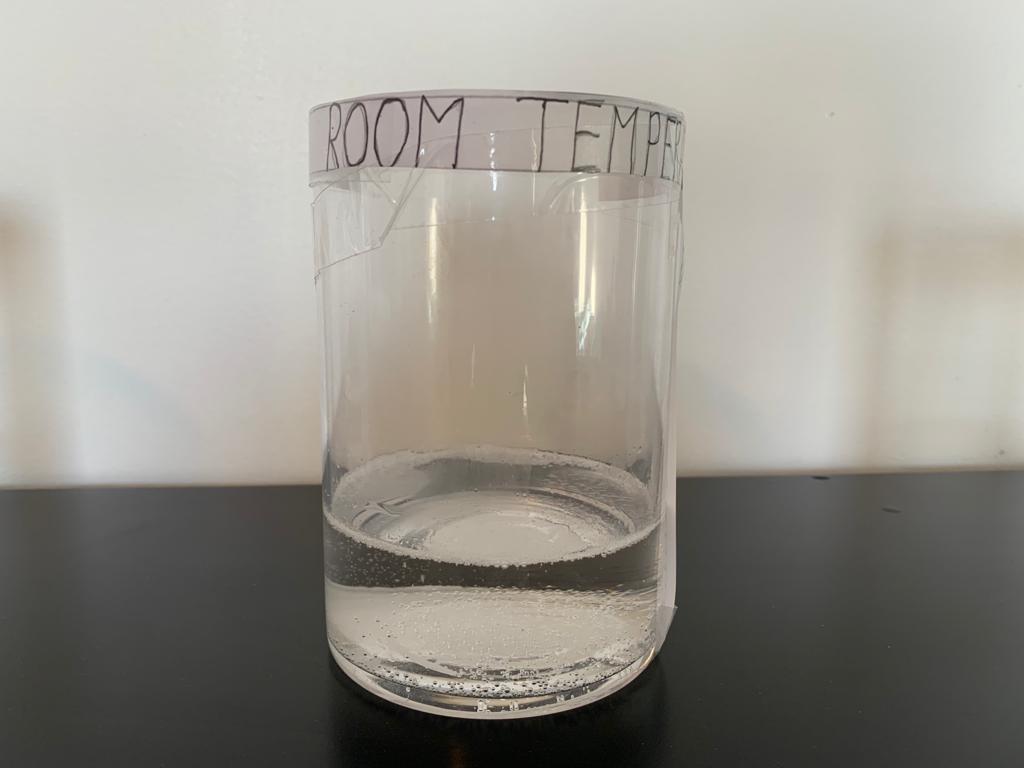 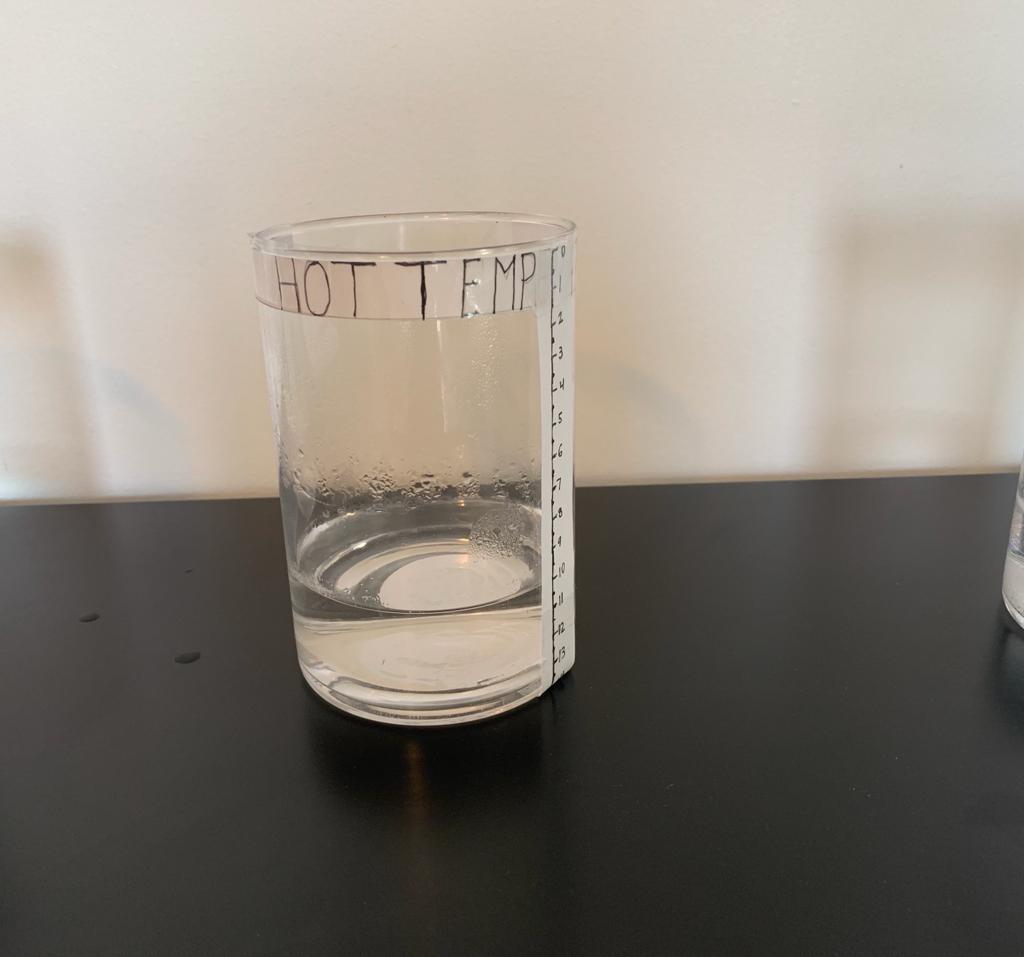 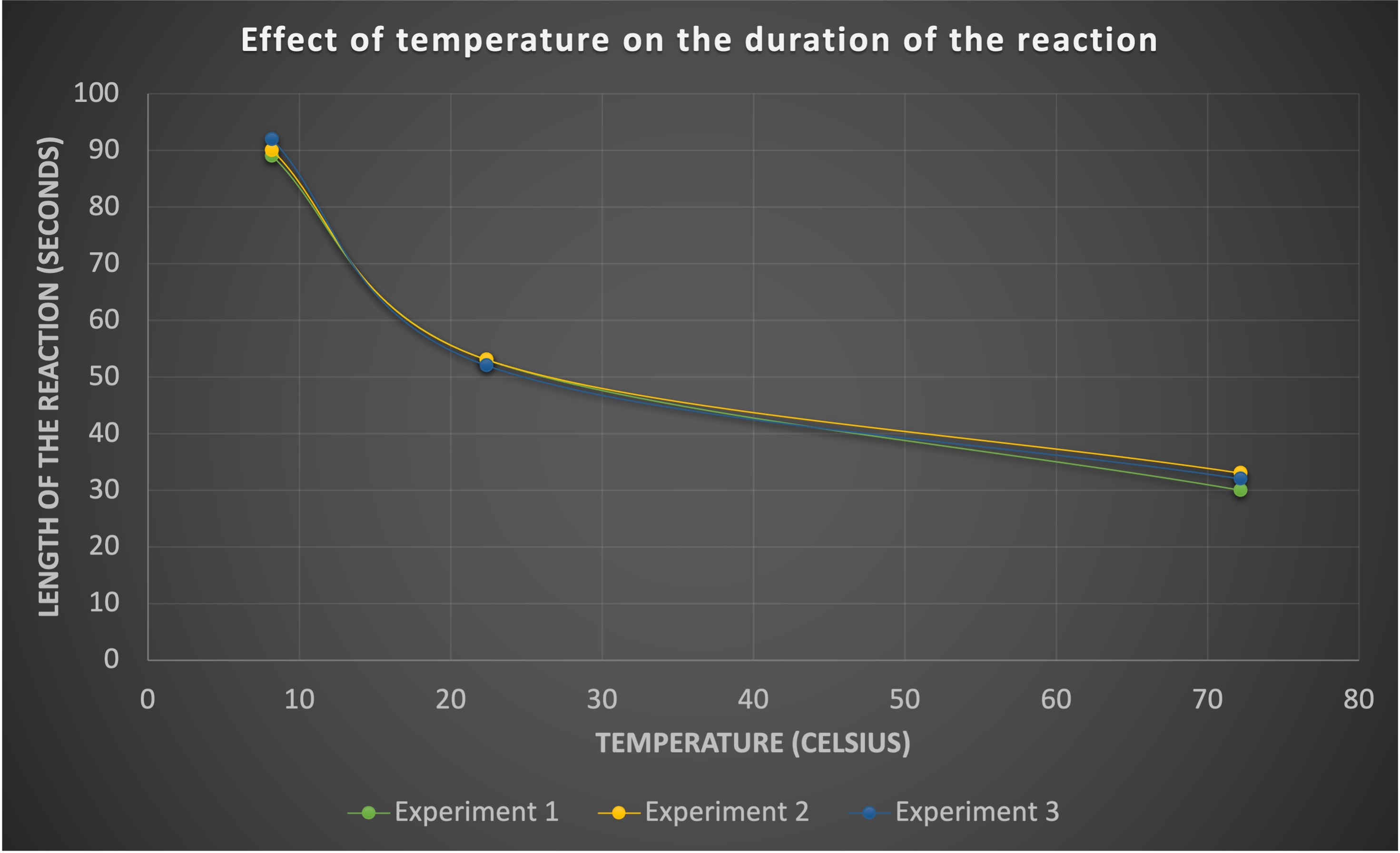 In this experiment, the jar with the hot water reacted the fastest and it ended the first. My explanation for this would be that the hot water molecules have a lot of energy in the form of heat so they start the soonest and they end the fastest because the water molecules have burned out all their energy at the start. The jar with the room temperature water reacted right after the one with the hot water because it is a mix of hot water and cold water so the water does have the energy to react fast but not as fast as the one with hot water. This sustains the second-longest because it does not have much energy so it can not be burned out at the beginning of the experiment. The jar with cold water did not have any additional energy so the reaction started the latest and sustained the longest. I also noticed that the jar with the hot water dissolved the Alka Seltzer tablet completely while the Alka Seltzer tablet did not dissolve into a clear solution in the jars with cold water and room temperature water.

My experiments show that increase in temperature speeds up the chemical reaction. Thus, the rate of reaction was fastest in hot water compared to cold and room temperature water.

There can several possible sources of error for this experiment. I have listed them below:

I am very grateful to my teachers at Sunalta School for giving me this opportunity to participate in the Science Fair. I enjoyed working together with my Mom on this project.