How is it Possible to fly a Drone on Mars?

I plan to research how it is possible to fly drones on Mars. I also plan to explore the theories of flight and what enable drones to fly both on Earth and Mars.

How is it possible to fly a drone on Mars and why is it needed?

I will be using websites such as NASA’s official website and other reliable sources ( ex: videos and books ) from internet to gather my information. I will validate the details I gather with multiple sources before using it so that it is accurate.  While I was researching, I didn’t just take the information from one place and use it. I checked with a few other websites to make sure that they shared the same information. I did this because I wanted to make sure my information was accurate and correct.

Just before I get started with the information I collected, here is some background info on the drone that I am studying:

Flight on the Earth!

This is the basic idea of how a drone works and flies on the Earth.

Following are the 3 things that are necessary for a drone to fly properly:

On the Earth, there are about 1.29 kg of air molecules per cubic meter.

Now finally, the rotor blade speed is basically the speed at which the blades on the drone spin (also known as rpm - rotations per minute).  A normal drone will need it’s rotor blades to spin at an average speed of 2500 rpm to fly on Earth.

Challenges of Flight on Mars-

Just as a rough estimate, to make a drone fly on Mars you would need to make the drone’s rotors spin at about 10,000 rpm.

Benefits of something that flies and can work autonomously:

Benefits of something that flies - continued...

In my opinion, I would say if you have the drone available (which NASA does) you should use it even though isn’t 100% necessary, but it would be very beneficial to research.

How the Drone was Designed

For the images I have used on this topic, please refer to the presentation shared below.

In the two pictures before, you can see which parts of the drone are what and what they do. This drone was designed to be very light weight. It was also made to only fly 90 seconds on each Martian day.

The rotor blades are made of carbon fiber foam core. This material helps to provide lift in the thin Mars atmosphere. The rotor blades don’t spin in the same direction, but instead they spin in opposite directions.

The part titled Avionics, is where the computer parts are stored. Ingenuity is programmed to be autonomous. This allows the helicopter to work all by itself including: charging, taking off, landing, taking pictures, sending data and signals.

How was the drone tested?

So, at this point NASA scientists think that increasing the rotor speed will enable a drone to fly on Mars. But something for them to keep in mind was that they couldn’t send the drone to Mars to just test it. They had to test it on Earth and make sure it would work. What they did was to put Ingenuity in a simulation room which was like Mars’ atmosphere. Ingenuity is a project that scientists have been working on for a long time. Their initial model with smaller and lighter blades didn’t work because of the air density level in the simulation room. Their next model had better and stronger rotor blades. This didn’t really pass their test ( the one they made spin really fast) because it used too much electricity and ended up adding weight to the drone to power it. So they kept testing and changing the drone until they thought of how to make it work and made it work. The final product had an increased blade diameter and passed the test in the simulation room.

How did NASA make their drone idea work?

Well, as I said before, all you need to do is to increase the rotor speed of the drone. But, in order to do that you would need more electricity. If you add things like solar panels to the drone to increase the electricity it gets it will also get heavier. If it gets heavier its rotor blades won’t be able to lift it up. So, what the NASA team has thought of it to increase the blade diameter.

What does the increase of diameter do to solve this issue?

So, instead of increasing the rotor speed, NASA decided to increase the blade’s length (diameter size ). What this does is it is now able to push down more air molecules than a smaller pair of blades. The reason for why they wanted to increase the rotor speed is because they wanted to make the drone push down more air molecules. But increasing the rotor speed practically does the same thing, but in a slightly different way. The blades will spin slower but push more molecules by covering a bigger area. But on the other hand their previous idea was to have smaller blades that spin really fast.

Each blade is 1.2 meters long. There are two blades total on this helicopter/drone. 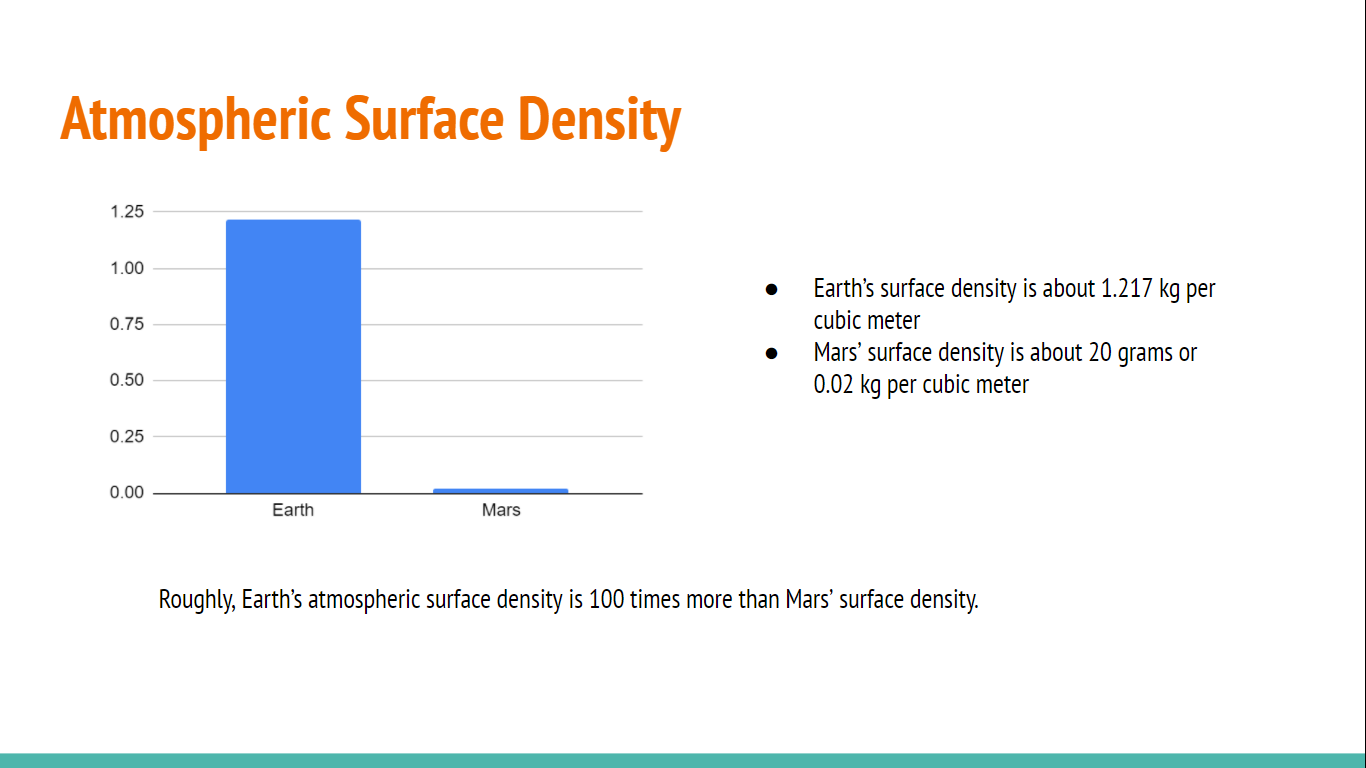 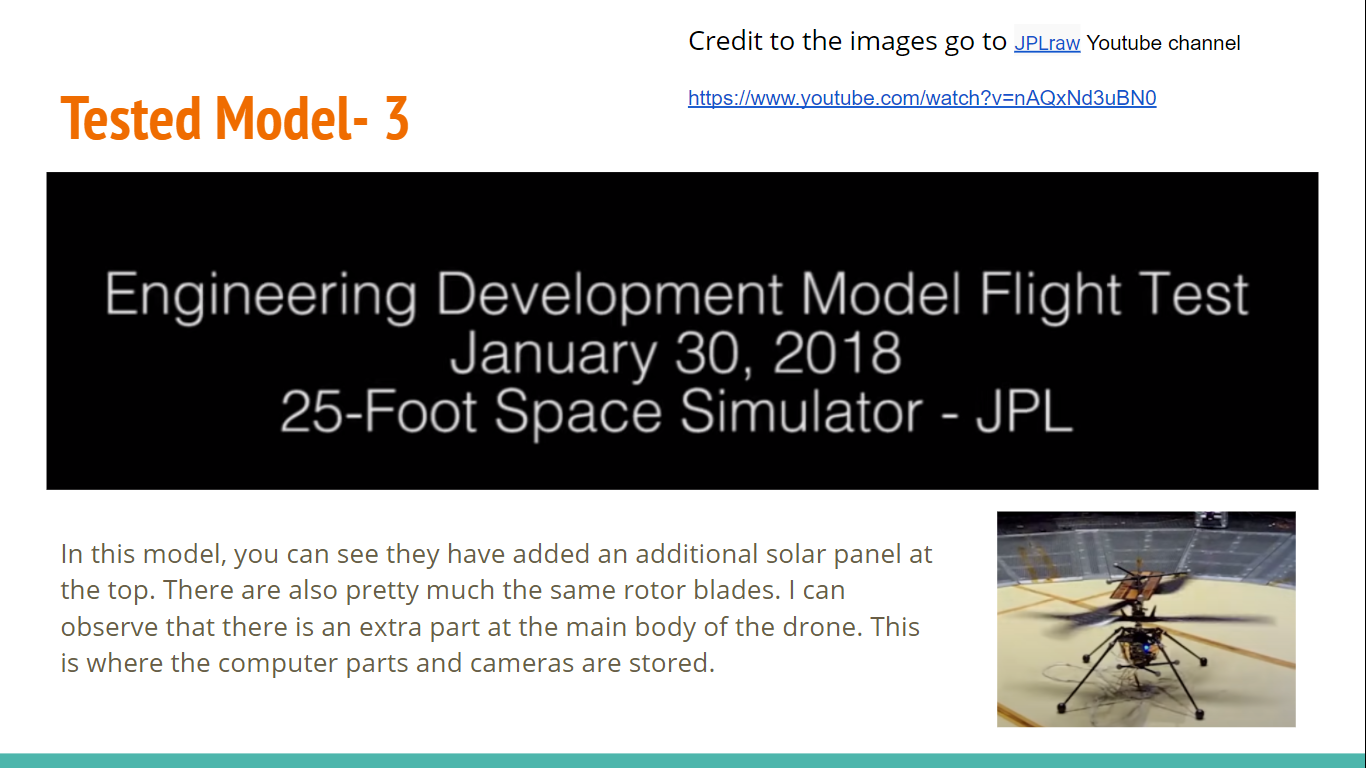 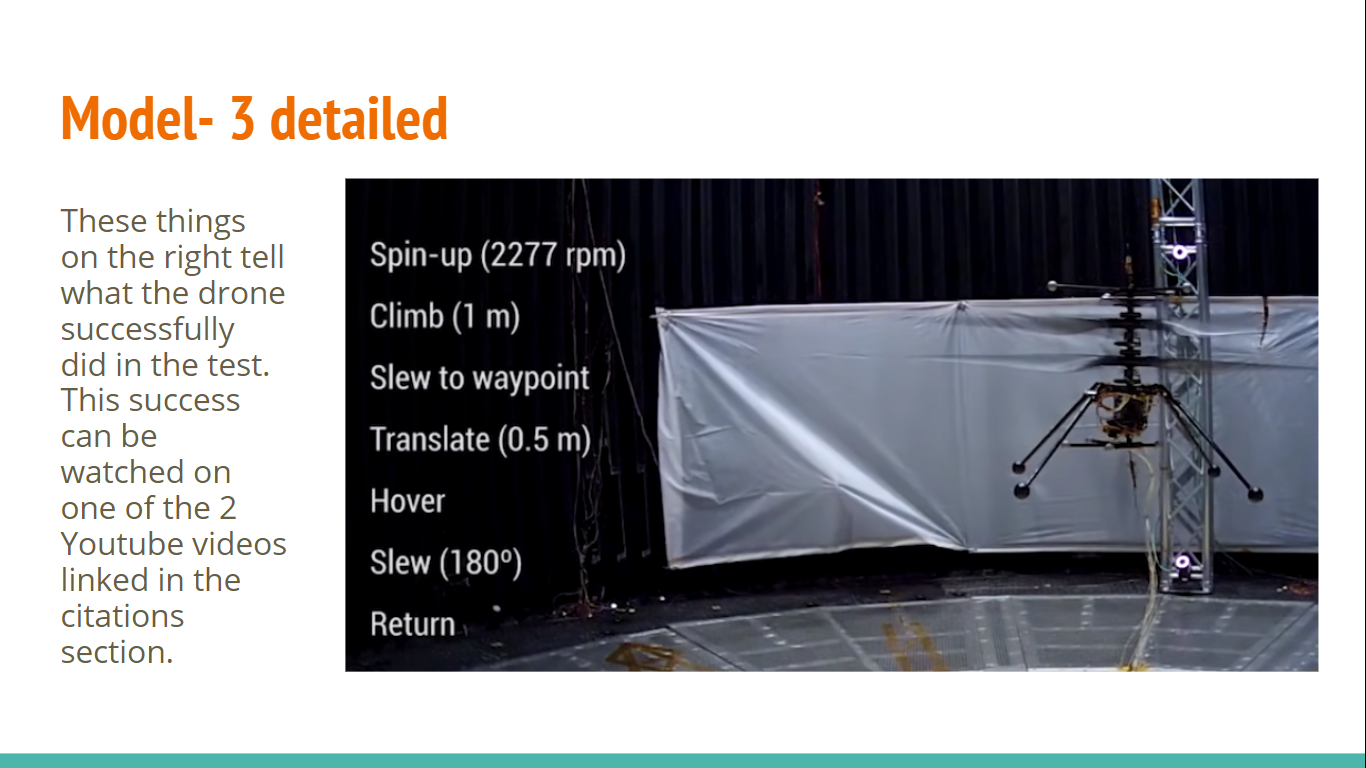 So, now we come back to the point as to how it is possible to fly a drone on Mars.

In conclusion, to make a drone fly on Mars all you have to do is, make it create a strong enough thrust force. NASA has found the easiest and most efficient way is to increase the wing diameter of the drone to make it fly. This basically causes the air molecules around the drone to be pushed down by the blades which would create a thrust force.

It is possible to fly a drone on Mars the same way it is on the Earth, but it requires more effort.

Here are the websites/resources I've used to get the information I have in my project:

Here is a link to an interactive 3D Ingenuity model:

Also, for some of the simple information in my project I haven't gone into a website, instead I have just googled it and got the answer.

Here are two videos showing the models that NASA tested in a Mars like air density:

I wasn't able to find many resources other than NASA for this project, since this rover is theirs and the information I got was maily from NASA websites.

I wanted to thank my science teacher/coordinator ( Mr. Downey)  for helping me understand the science fair process and how everything worked.

I also want to thank my dad for supporting me throughout this project and helping me to record my final video.

A big thank you to the people that wrote the websites ( and videos ) that are linked in the citations section. These were the resources that helped me with my project!