I measured water depth and water quality upstream and downstream of a storm water pond over a few weeks.

The city of Calgary uses storm drains and storm water ponds to move water from roads and lawns to streams and rivers; they also capture pollution. <https://www.calgary.ca/uep/water/water-and-wastewater-systems/storm-drainage-system/storm-drainage-system.html>. I have two hypotheses about pollution:

1. Stuff suspended in the water, like dirt, will be higher at the upstream than at the downstream, because the dirt will settle in the pond.

2. Stuff dissolved in the water, like chemicals, will be the same at the upstream and downstream because dissolved stuff doesn't settle.

Upstream station: I think that this is a natural stream, but storm water goes into it. The water is clear, and there are lots of plants. The stream goes into a storm water pond. 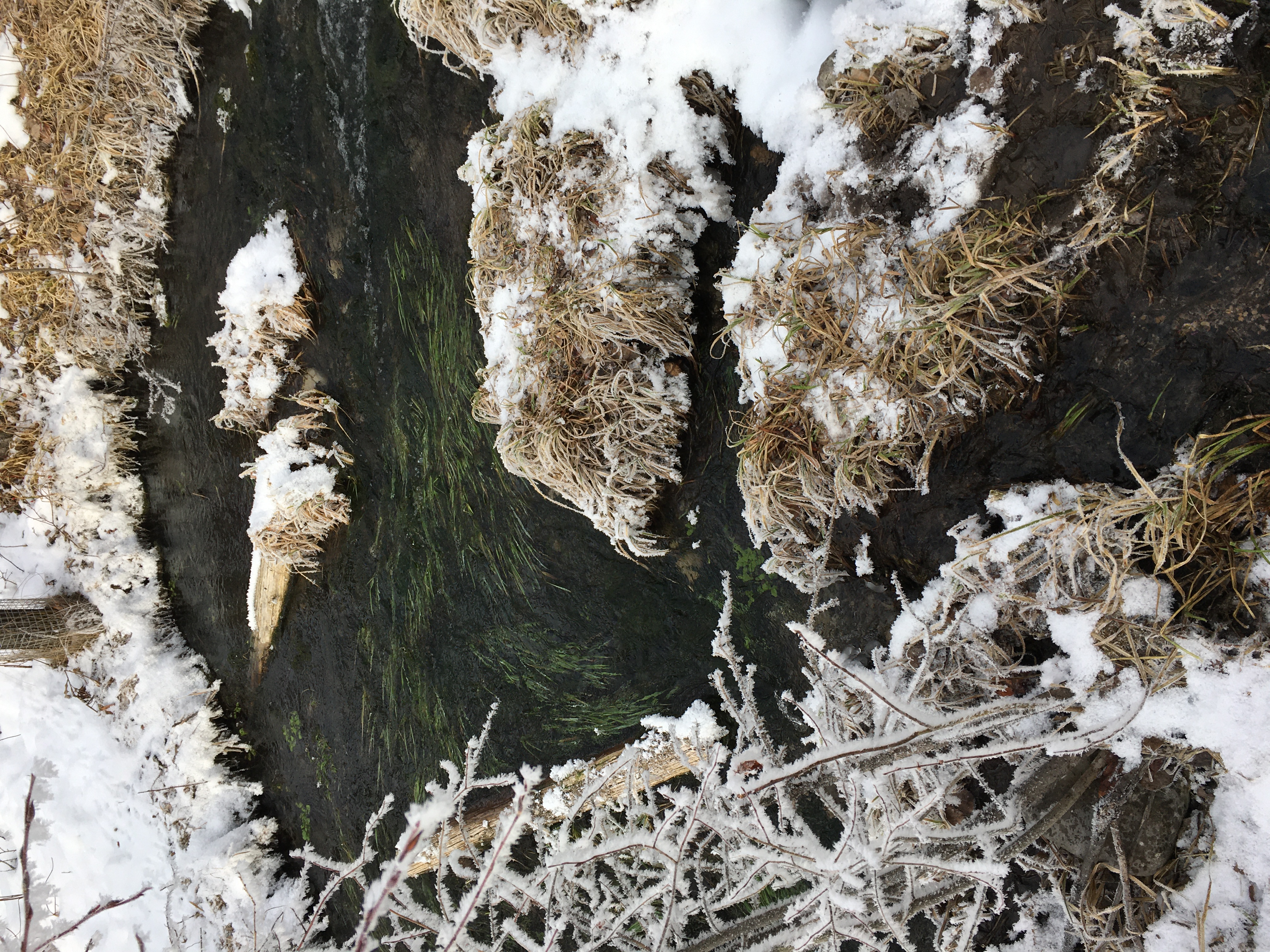 Storm water pond: I didn't study the pond. Where the stream goes into the pond geese gather in the winter. On the other side of the pond the water drains through a grate at the surface. 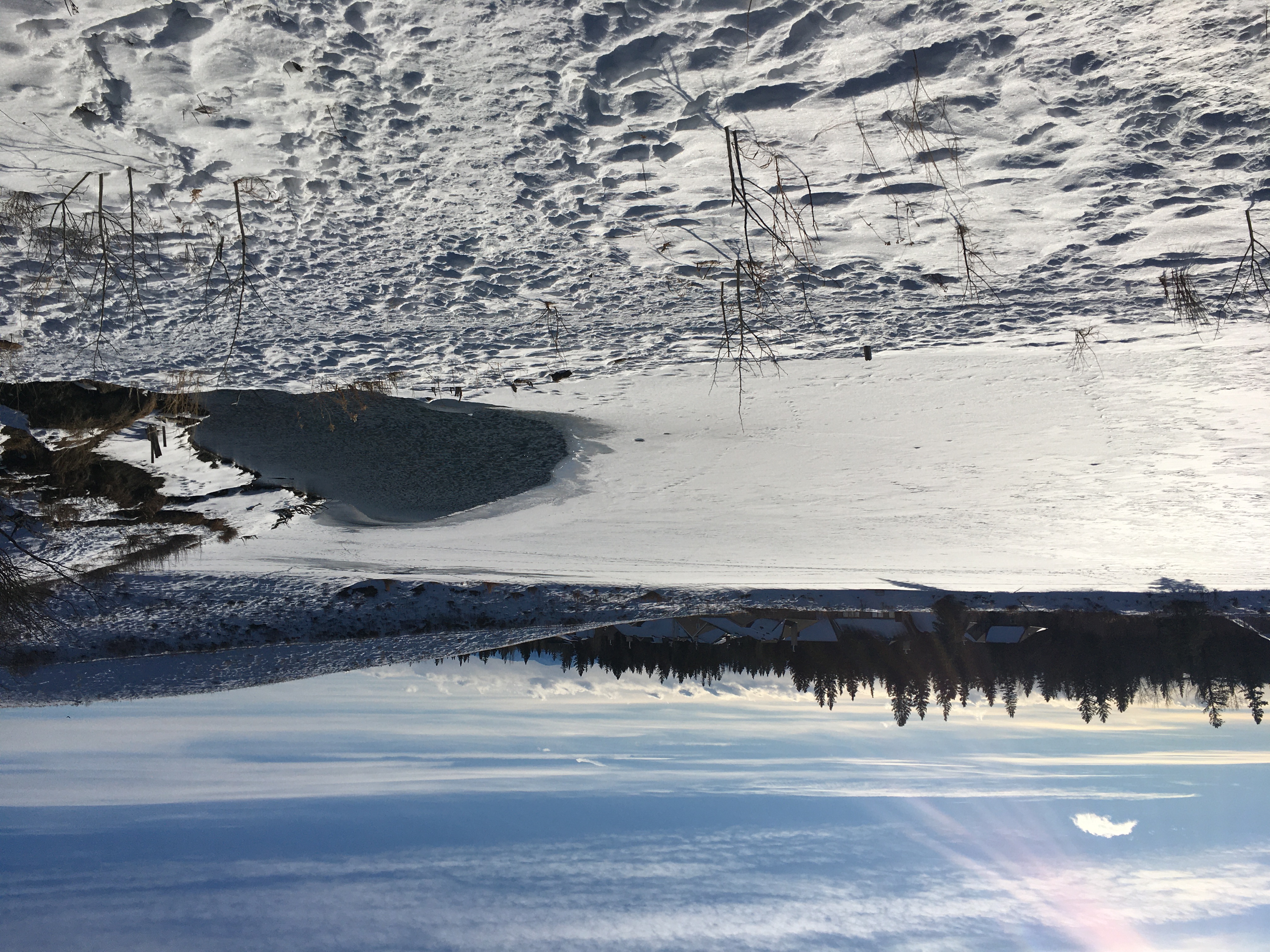 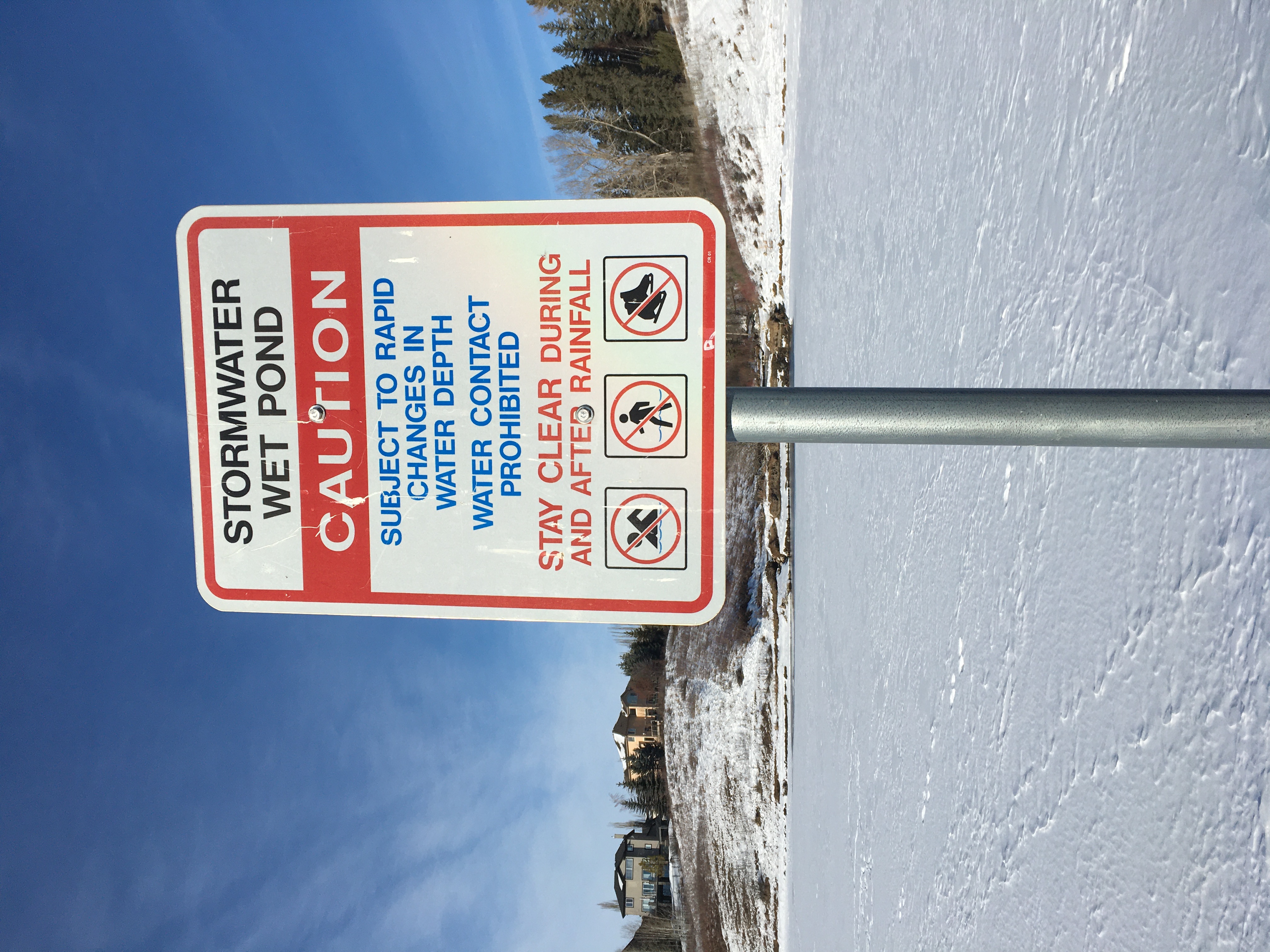 Downstream station: The pond drains through a grate into a pipe that empties on to a waterfall. The stream then goes under a road, and to a larger stream that eventually goes into the Elbow river. 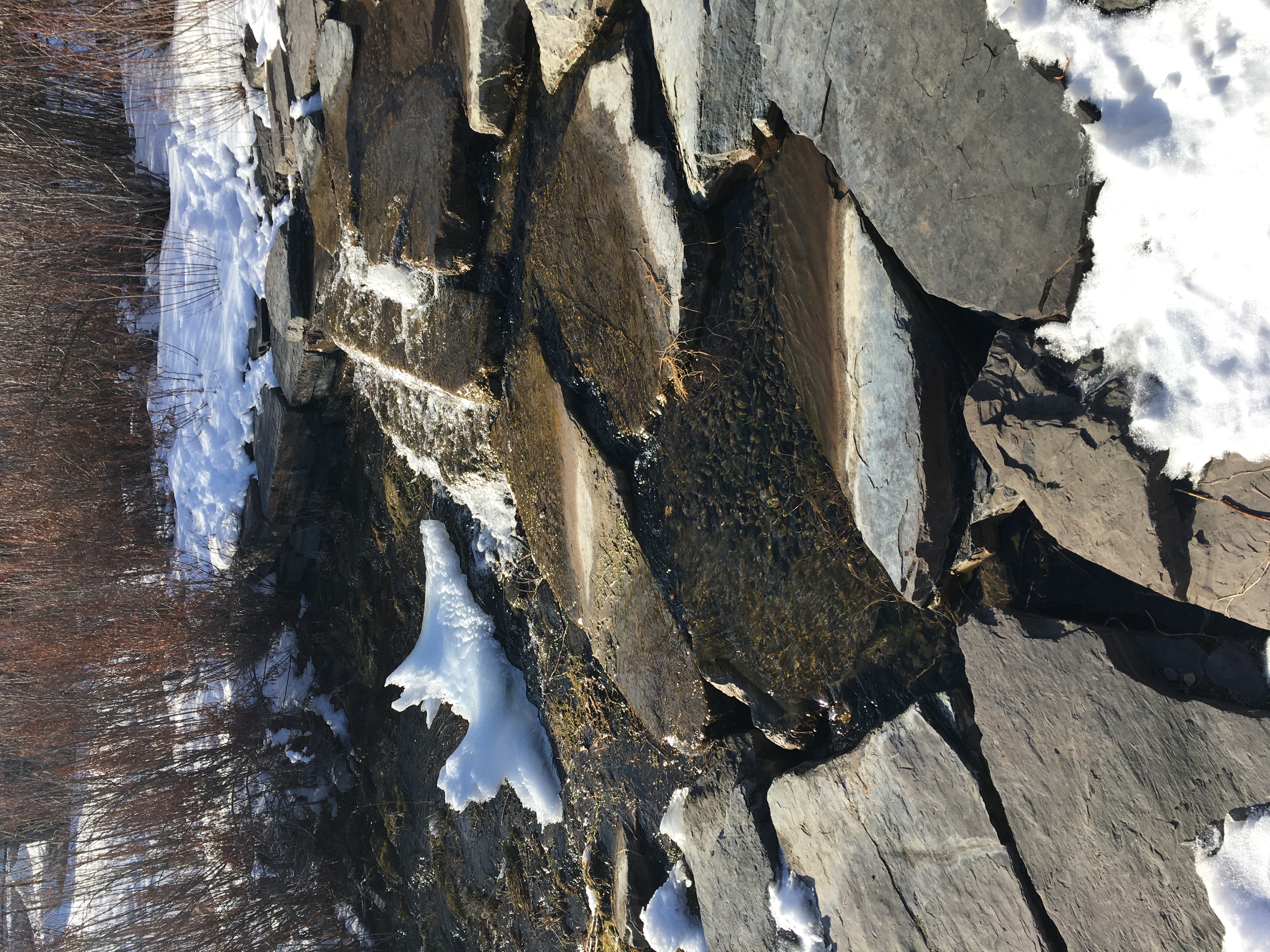 Photo from Google Earth, showing locations of my house and where I sampled. 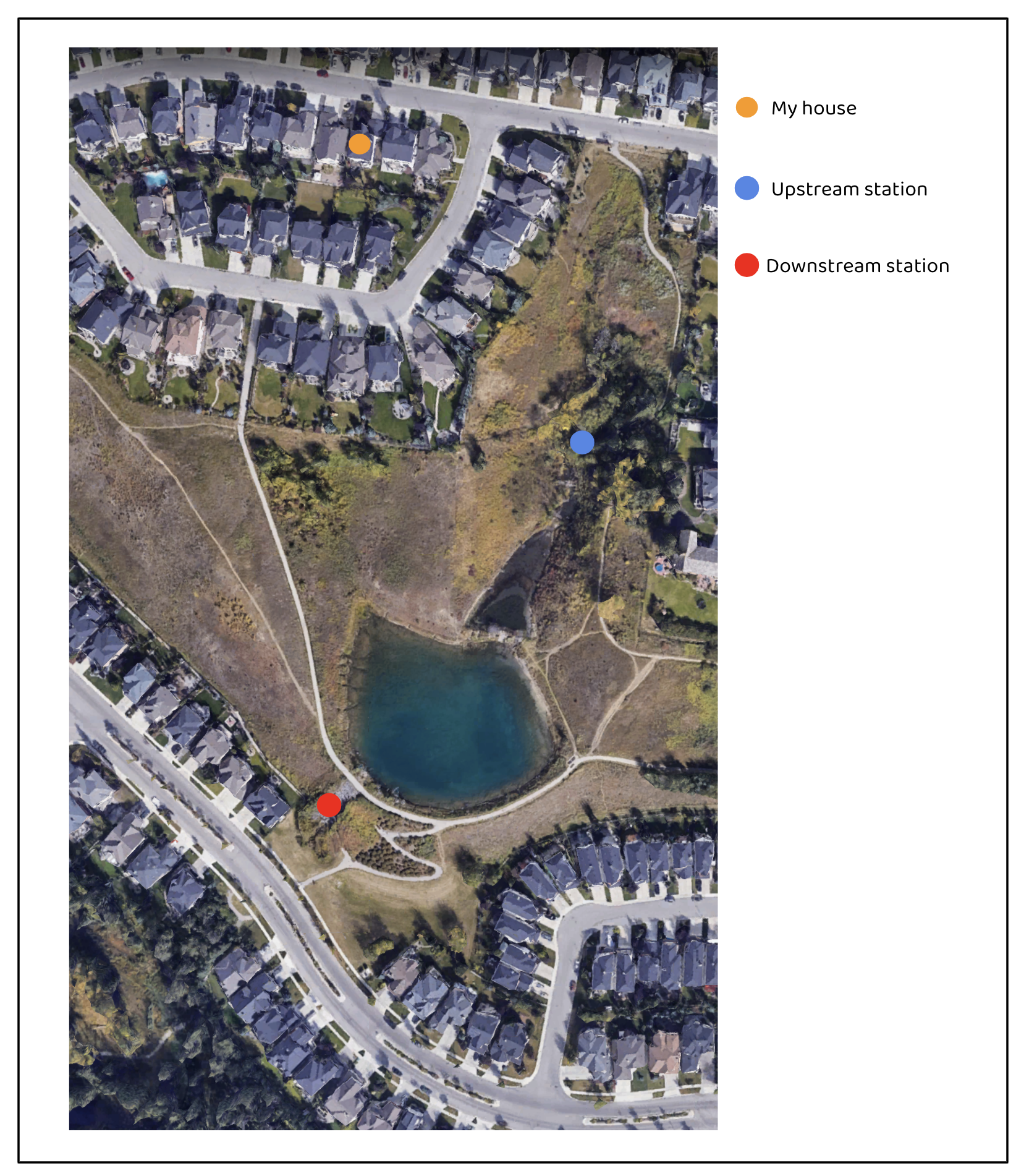 Water depth:  to see if there is more or less water in the stream

Water temperature:  measure to see if a stream is a good temperature for fish

Dissolved oxygen:  measures if there is enough oxygen for fish to live in the water; my dad tells me fish like to have greater than 5 mg/L of oxygen

pH:  measures if water is acidic (less than 7) or basic (greater than 7)

Conductivity:  measures how much dissolved stuff, like salt and nutrients, is in the water

Turbidity:  measures how much suspended stuff, like dirt and garbage, is in the water

Chlorophyll:  measures how much algae is in the water

When I go to a station I record:  the date, the time, the location, the air temperature and weather, and any other notes. Then I measure water depth to see if there is more or less water in the stream. Then I use a water quality sonde (from my dad's work) to measure water quality. The sonde has sensors for water temperature, dissolved oxygen, pH, conductivity, turbidity, and chlorophyll.

I write the data in my notebook and then at home enter the data into google sheets. 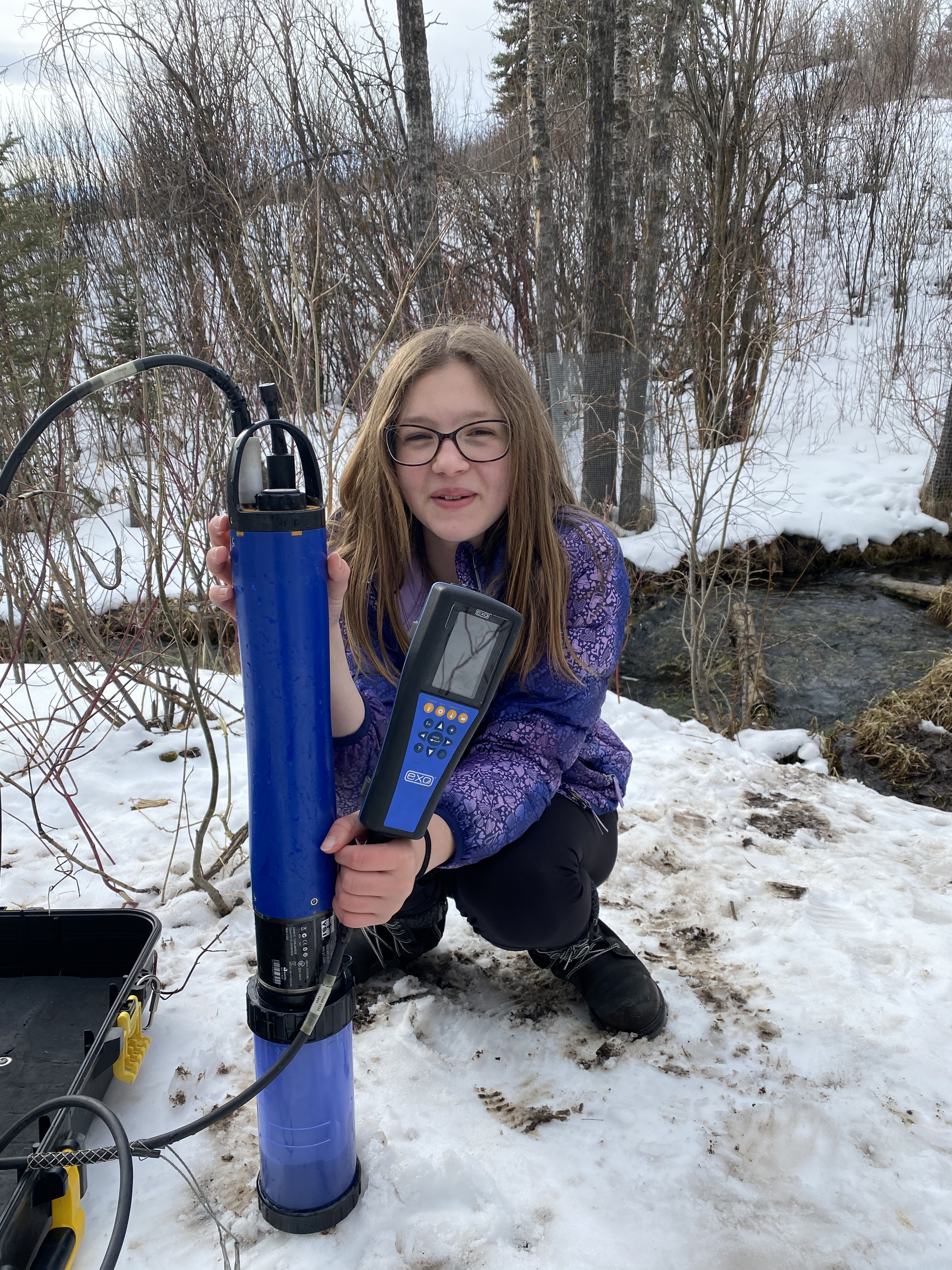 Air temperature is the dots and line. Snowfall is the bars. 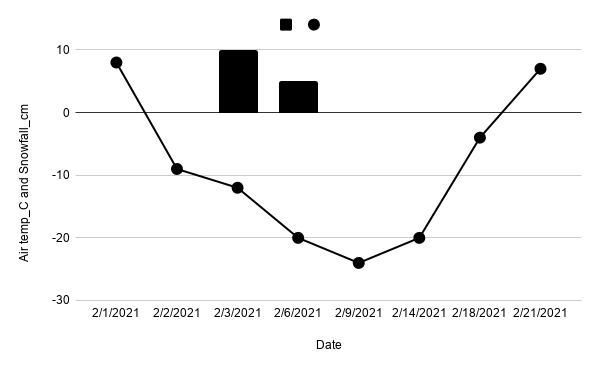 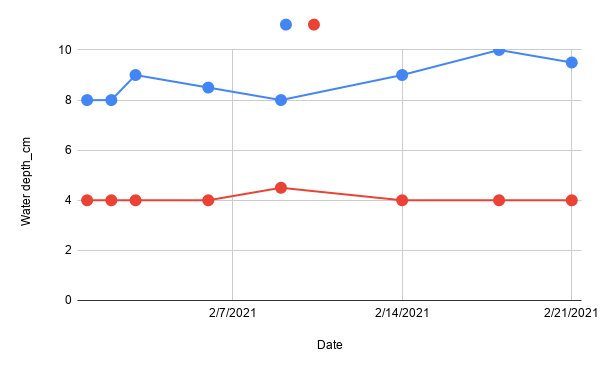 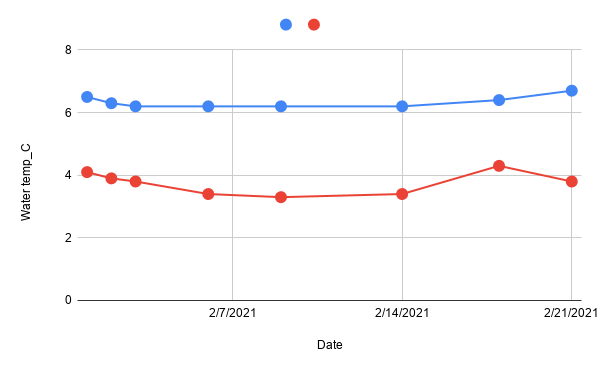 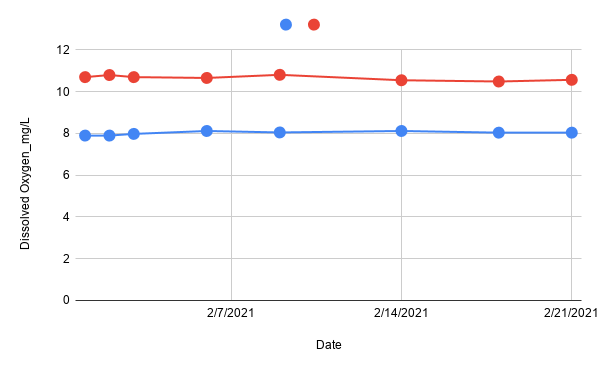 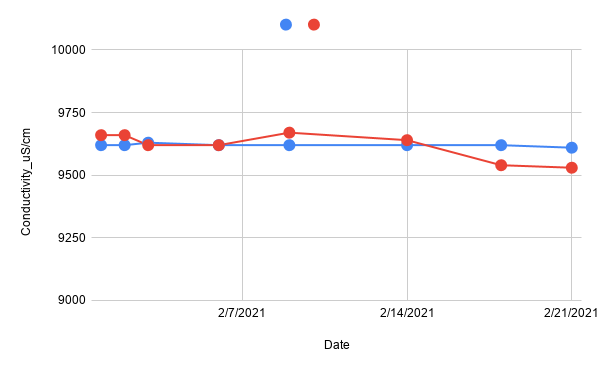 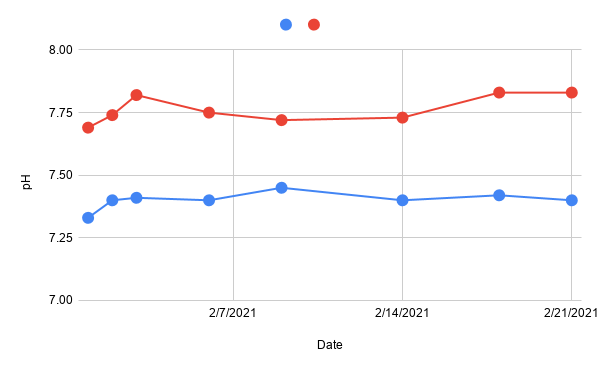 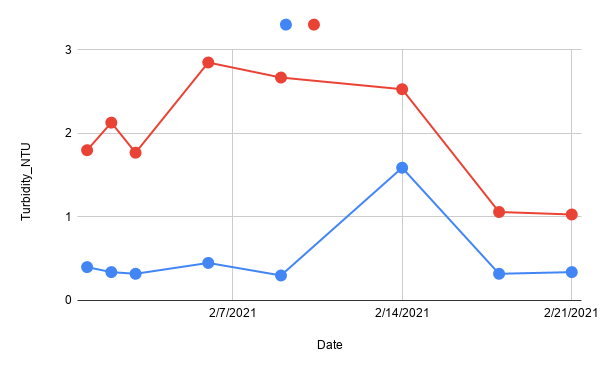 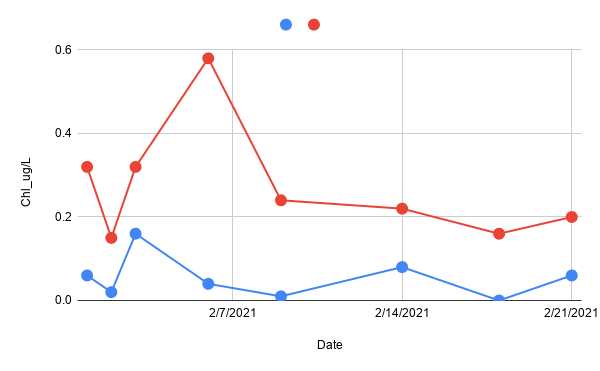 Over the three weeks the air temperature was above and below freezing and there were periods of snowfall and snow melt.

The pH of both stations was between 7 and 8, so the waters are both slightly basic. I don't know why they are different.

The turbidity of both stations was low. The downstream station was higher (1-3 NTU) than the upstream station (0-1.5 NTU). One of my hypotheses was that stuff suspended in the water, like dirt, will be higher at the upstream than at the downstream, because the dirt will settle in the pond. I was wrong! One reason why was we didn't have any storms in the past three weeks that would have carried dirt and garbage into the stream. Another reason is because geese like to go in the water right above the pond and they stir up stuff that goes into the downstream station.

The chloryphyll levels at both stations were low. So there wasn't much algae in the water, but there was a bit more at the downstream station because of the pond.

I didn't measure the streams every day, just eight times in a three week period, so I don't know what would have been different on the days I didn't go.

When I measure water quality I have to be very careful to not stir up mud and other stuff. I tried not to, but I can't be sure that I didn't stir the water up. I also found out that it isn't a good idea to take a dog sampling.

I thank my dad for sharing his knowledge about water quality and for letting me use a water quality sonde from his work (he works for Alberta Environment and Parks). I thank my mom and dad for taking me sampling. I thank my dad's co-worker Jim Zettel for calibrating the sonde. I also thank my teacher, Deirdre Cooksley for helping me understand these questions better.