What Is Sound, Soundwave, and Sound Frequency?

Question/Problem: What is the scientific definition of sound, how is the sound created, what are soundwaves and sound frequencies, and how do human beings process soundwaves through their brain?

Hypothesis: If a sound is created by the vibration of an object, then a sound is a form of kinetic energy because kinetic energy is the movement of matter that depends on mass and motion, therefore, because particles are matter being moved when something vibrates, the particles gain kinetic energy and sound, soundwaves, and sound frequencies are being produced.

Sound, just like electricity, is a form of both, kinetic and potential energy (mechanical energy). Sound is a wave or vibration that can travel through solid, liquid, and gas. Evidently, Sound is an energy that can be heard and made, it is created by a mechanical movement that is produced when particles vibrate. As human beings, we call sound by a lot of different names, for example:

No matter what type of sound is made or what made the sound, they are all produced the same way: Through vibrations

How is Sound Made?

Sound is a wave or a vibration made when an object moves in any way. The vibration of the object becomes the source of a "domino effect", as the particles from the surrounding medium (solid, liquid, or gas) start vibrating and bumping into each other and causing other particles to start vibrating too. This cycle continues until the vibration reaches our ears, which can detect the vibrations and the ears send signals to our brain. When these vibrations are transferred from particle to particle, sound waves are being created.

Air particles bumping into each other

The Three Types of Sound:

Soundwaves are what is created when particles create an ongoing and consistent sound effect that travels in all directions. It is a horizontal wave that runs lengthwise and can travel at 761 mph or 1100 feet/second. This continued motion created, is called a soundwave. Soundwaves have different shapes depending on the pitch or frequency of the sound. There are two different types of soundwaves: 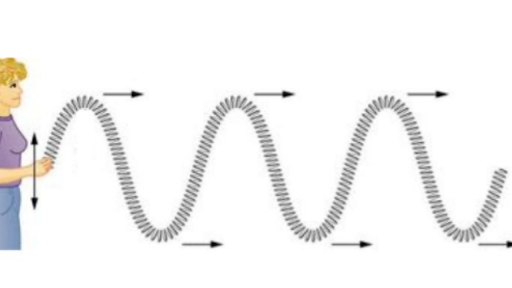 2. Longitudinal Waves: The disturbance moves in the same direction (parallel)  as the direction of the wave. 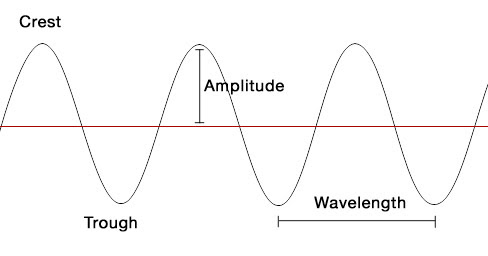 (The baseline is the red line running across the middle) 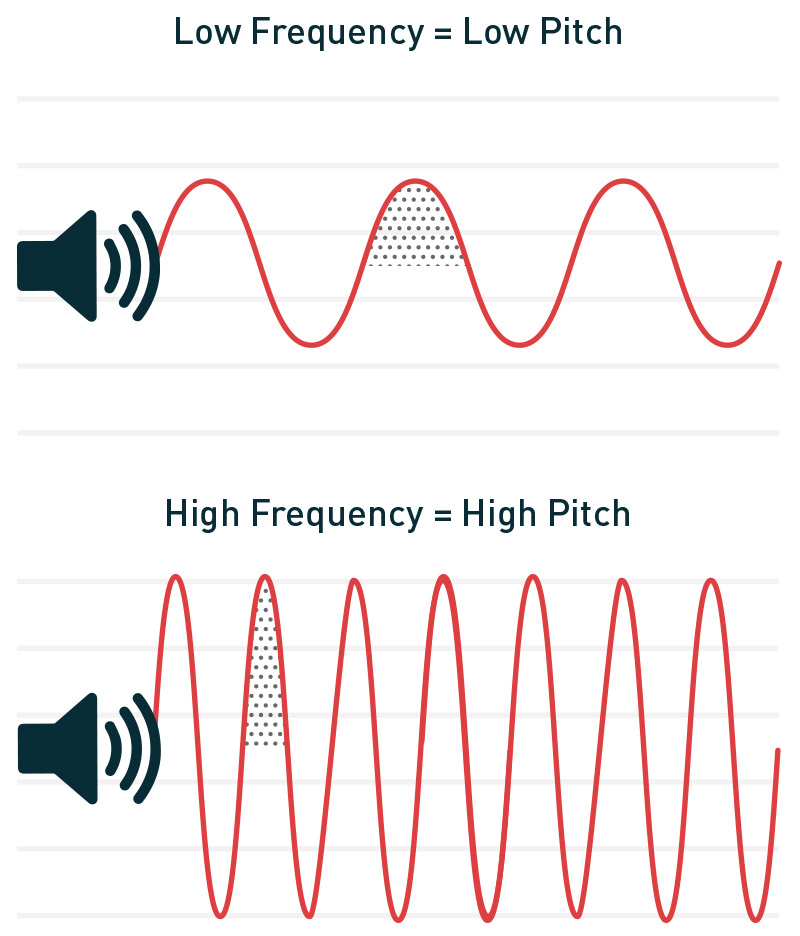 How do Humans Detect Sound? When soundwaves make their way through our ear canal (the tube that leads to the eardrums), the vibrations make our eardrums vibrate too, these vibrations continue until they reach the other parts of our ears (malleus, stapes, and incus). These parts of our ears send a signal to the cochlea, the part of our ear that has the job of sending signs and indicators to our brains about familiar wave sounds (languages) which then converts those sounds into meanings that we can comprehend. As mentioned before, the eardrums are only capable of detecting frequencies from 20 Hz to 20,000 Hz, while other animals in the world are capable of detecting much higher and lower frequencies than us. 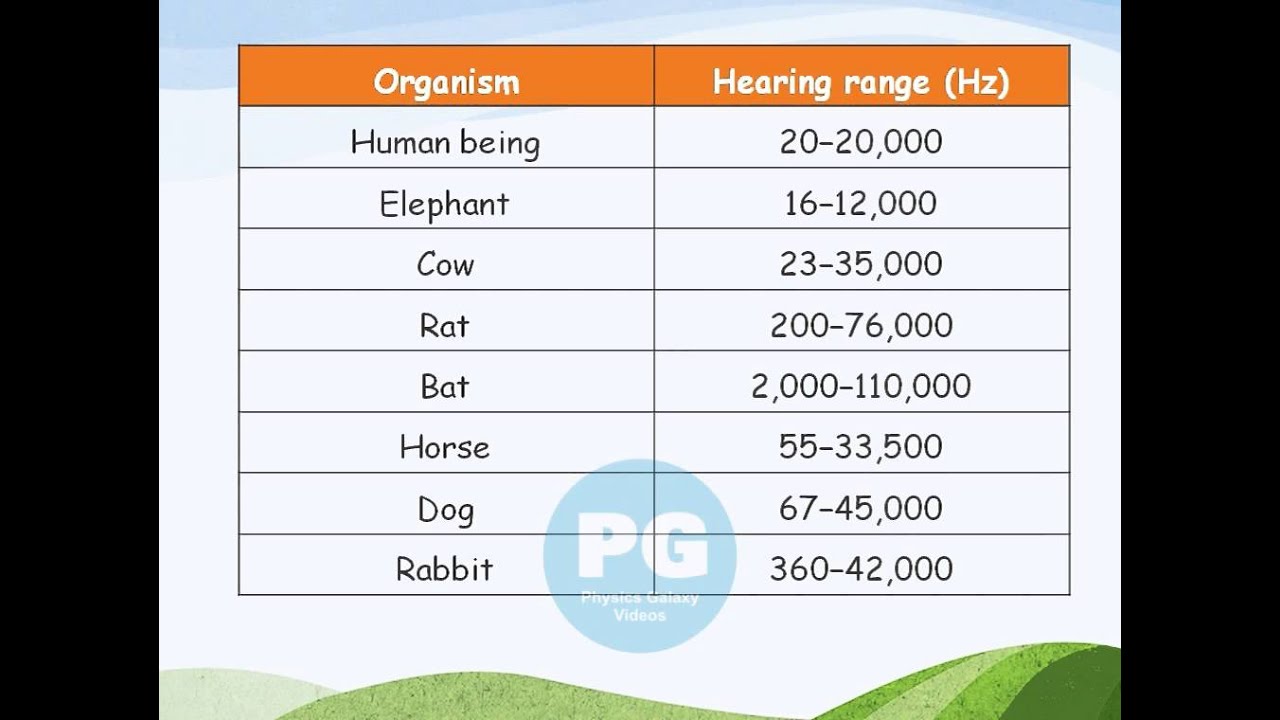 - Sound travels faster in water than through any other medium

- The loudness of sound is described as volume, and we use decibels (DB) to quantify the volume

- Dogs can hear a higher frequency than humans, allowing them to hear things that we can't

- Light travels faster than sound, this is why on rainy days you might be able to see the lightning before the thunder 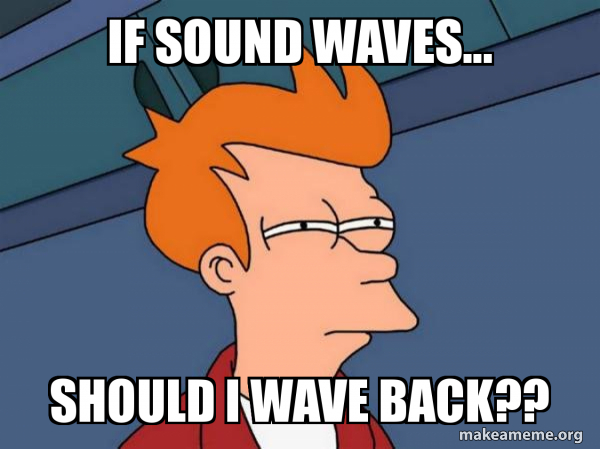 Application: Where Would This Information Be Useful In Life?

Scientists use sound frequency in a lot of different ways, for example, biophony scientists use gadgets and mechanics to determine which animals are living in a certain environment by detecting the noise they make. In the Amazon forest, many microscopic species that cannot be seen very well have been discovered using the sound frequency they make. Scientists can find out whether or not a species is still living there, has gone extinct, or if the breed is thriving in the environment by comparing the pitch or lack of frequency about every once a year. This way, through a period of time, they can figure out how the species has been living in its habitat.

In the military, the army can use different frequencies through any medium to communicate with their allies. They can send code messages without anybody noticing or any sort of social communication. Even if the enemies detect the frequency, they will not be able to decode the messages.

Conclusion:  In conclusion, a sound is a vibration that is made when particles vibrate and bump into each other, sound can travel through any medium that contains particles and has the capability of bumping into each other. Soundwaves are the motion in which particles continue to intersect one another and sound frequency how many times several soundwaves pass through a place at a given time. My hypothesis was incorrect because a sound is not a form of mechanical energy, which is a type of energy that is made when both potential and kinetic energy is possessed in an object. Soundwaves are very similar to sound because sound waves are created when sound vibrations occur. They are created when particles continue bumping into one another and the sound travels further and further.

I would like to thank my family for supporting and helping me with my project whenever I needed help and encouragement. When I had trouble figuring a concept out, they would try to help me as much as possible.

I would also like to acknowledge my science teacher as well because she really helped me understand and clarify instructions I did not understand. She gave me very useful feedback and made sure my work was up to the best of my ability.