A research project regarding the influence of film lighting on human perceptions of characters, whether they be a villain or a hero.

How does lighting in filmmaking trick a viewer’s brain to feel a certain emotion towards a hero or villain character?

If the character is portrayed to be the villain antagonist, then low key lighting would be used, and more desaturated and darker colours would be displayed, because low key lighting creates harsh shadows to reflect a dark and ominous mood, and cool colours make the atmosphere more pensive and tense. As the brain is more accustomed to bright, warmer colours in light nature outside, being in darker places with desaturated, cool colours is unnatural to the brain, and it feels more grim and unsettling.

My project is a research project and does not require a specific method, though it contains the Background Research, Question, Hypothesis, Data (extensive research), Analysis, and Conclusion.

Lighting from a psychological view

- Lighting can affect our emotions, and also our perceptions.

- Our perceptions are supported by the emotions we feel during the film.

- When manipulating lighting, you are the one that is trying to affect the viewer’s emotions.

- Whatever is shown on the screen will be the perception of reality to the viewer.

Ex. studies suggest that if the lighting is more intense, then you will feel warmer in the room, even if the temperature hasn’t been raised.

- Can also be used to communicate dark warnings.

A film lighting technique used to reduce shadows and contrast on the subject.

- Many white tones and bright lights are used.

- Creates a very optimistic, happy, joyful or upbeat mood to a shot.

Film Colour Theory: a theory stating that colours in film can trigger certain emotions from viewers. This study researches the different effects of film lighting and how it impacts audience emotions through an experiment.

- 3 lighting styles, Low Key Lighting, High Key Lighting, and Available lighting (light that is gifted naturally in the given environment) were tested.

- Participants in the study would watch a film in one of the lighting styles, and then later report what they felt during the experience.

- Participants who view the film in High Key Lighting would see the scene as flatly lit without shadows, low contrast, bright setups, and a shiny look.

⇒ This would provoke positive and optimistic emotions.

⇒ Characters in this lighting are interpreted as good hearted, funny, lovable, and heroic.

- Participants who view the film in Low Key Lighting would see deep shadows, darkness, and high levels of contrast.

⇒ This would provoke dangerous and mysterious emotions.

⇒ Characters in this lighting are interpreted as having evil intentions, being manipulative, and untrustworthy.

The results of the experiment: 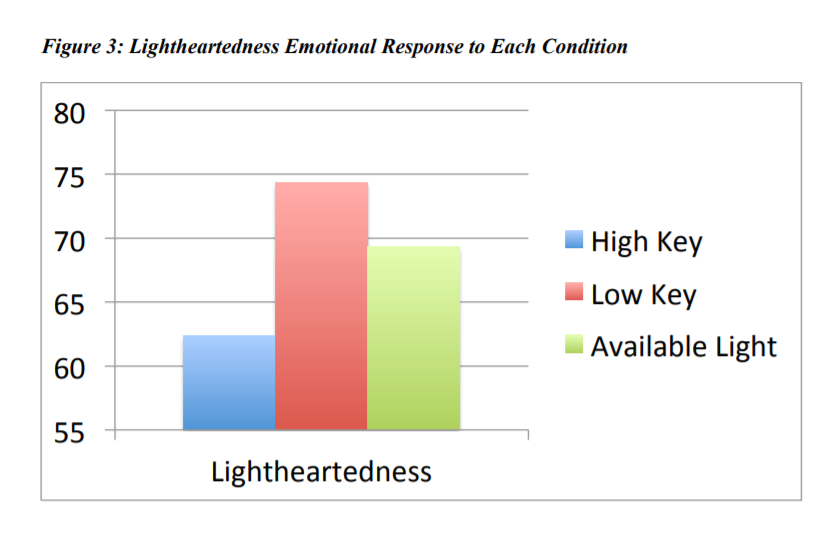 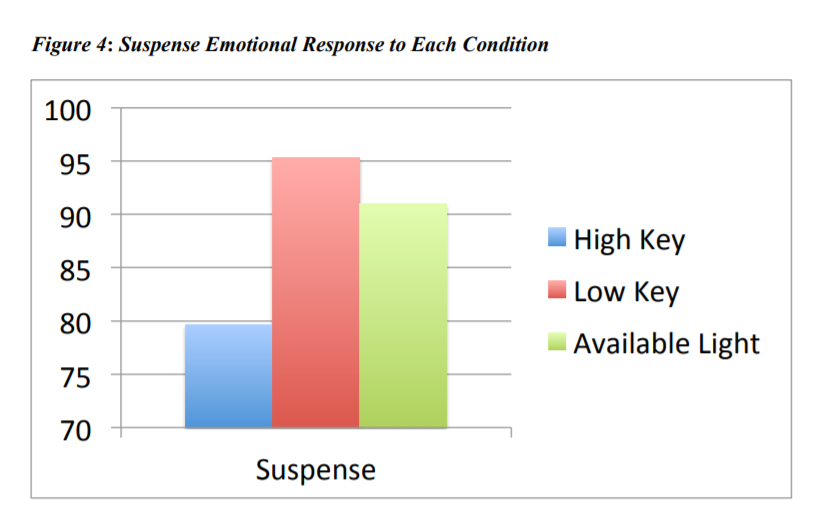 - Stimlus: something that provokes a reaction or response of an action.

⇒ Ex. pulling your finger away from a hot pan.

- Lighting in an architectural space can create many perceptions

- Lighting can entirely transform a room

⇒ How perceptions would be impacted by changes in lighting

- Findings: Impressions like space, clarity, comfort, complexity, etc. can be affected by lighting

→ Brightness/Dimness - how bright a light is

⇒ When these factors are adjusted, changes would be made in the human response

- Research from Kaplan and Kaplan

- When entering a new environment that feel similar to other environments, we feel happy/comfrotable

⇒ We understand the setting more

- When entering a completely unfamiliar envrionment, we feel unsettled

⇒ We find it difficult to understand the envrionment

- Being in a new environment can be good

→ Keeps us engaged/interested in the environment

→ High level of complexity (to keep us interested in the room)

- Our brain wants a balance of coherence and complexity

⇒ Comfort: how much comfrot someone finds in the environment

⇒ Awakeness: how much awakeness they feel

⇒ Power/Control: how much power/control they have over the lighting

- Comfort and Awakeness act as one, because they can move as a single integrated response than 2 separate responses

⇒ Ex. if your environment should be tense, it should be awakening but unpleasant

⇒ A relaxing environment could have low awakening but high comfort

⇒ Villains are lit from below, especially when shown as monstrous/unnatural

⇒ Halloween lighting - lighting from below

→ Unnatural to us, so its good for villains

→ In the past, women were lit with soft light, men with hard light

→ Plays with attractiveness of face with chiaroscuro

→ Not much of a specific light for heroes

⇒ Goal for heroes is to make them look powerful/bold

⇒ Heroes should be lit attractively

→ Depends a lot, because it constantly changes over time

⇒ Villians should be lit unatttractively

⇒ Low key lighting for villains can change over time

→ Ex. films have gotten progressively darker over the years

→ Quote: "Cinematic theory suggests that audience members experiencing a film lit in the noir style will interpret the highly shadowed, dark, and contrasting images with feelings of danger, suspense, depression, mystery, and evil. Characters in this mode should be interpreted as having evil intentions, being manipulative and untrustworthy."

⇒ Studies show that if lighting in architecutre can influence audience emotions, film lighting can do the same

→ Warm/Cool - warm colours = relaxation, cool colours = tense and alert. Can be applied to understanding of heroes/villains

- Gives a sense of mystery - spikes complexity in villain character

- Power/Control can't be used, because only filmmakers control the lighting

→ Ex. if you wanted audience to feel tense/scared of the villain character

- Low sense of comfort - audience is scared/uneasy of villain character. can be done by using low key lighting

- My hypothesis was correct

→ These emotions lead to perceptions of heroes

⇒ Low key lighting give feelings of danger and mystery

→ These emotions lead to perceptions of villains

- Could be useful/benefit real world

⇒ lighting is in many places in our daily lives, not just films (architecture, commercials, photos, buildings, gallers, etc.)

⇒ can apply understanding of film lighting psychology to other lighting environments

→ ex. an advertisement that needs to communicate a positive mode can use high key lighting

- Something that could've been worked on

⇒ Exploring more about the psychological impact on audience emotions

⇒ Include the things that could've been worked on

Quartier K., Van Cleempoel K., 2008, The influence of lighting in the build environment: a study to analyse human behaviour and perception as measured by mood and observation https://measuringbehavior.org/mb2008/individual_papers/SIG_Theuws/SIG_Theuws_Quartier.pdf

TCP, 2017, The Psychological Impact of Light and Color, https://www.tcpi.com/wp-content/uploads/2017/12/Psychological-Impact-of-Light-and-Color.pdf

Hellerman J., 2019, How A Film Colour Palette Can Make You A Better Filmmaker https://nofilmschool.com/Film-color-theory-and-color-schemes

Four experts greatly helped me in my research throughout my project, and provided me with essential primary sources to support my hypothesis. They are Robert G. Nulph, Patrick Keating, Carl R. Plantinga, and David Bordwell.

I'd also like to acknowledge my mentors and teachers Iain Hotzel, and Karen Davis. They helped me immensely during my project.