The process to make edible water bottles is a simple chemical reaction. It begins with two main ingredients: sodium alginate (a material made from a type of seaweed called brown algae) and a calcium solution (I used calcium lactate). As soon as the sodium alginate and the calcium lactate bath are combined, the calcium reacts and forms a gel like substance. The sodium alginate forms a sphere when placed in the calcium lactate bath as a result of the reaction. In learning about these spheres, I've found they have had applications for food products in the past, and there are possibilities for the chemical reaction to be used in the future with 3-D printing as described in an article titled "Molecular Gastronomy and the art of Reaction-based 3D Printing"  (Mire, 2014).

In my experiment, I used distilled water because Calgary water contains calcium and that would affect the creation of edible water bottles. It would have reacted with the sodium alginate solution and ruin the mixture. In 2019, according to the City of Calgary data, Calgary tap water contained on average 55 mg/L of calcium. (City of Calgary, 2019)

If you were to put a sphere of liquid in space there would be no gravity or other forces to interfere with the surface bonds. That would mean that the liquid would stay in a spherical shape (Kiddle Encyclopedia, 2020).

A sphere shape allows for the least amount of surface area possible on a water droplet. When droplets have an increase in volume, they are impacted more by forces such as gravity and they begin to deform (Institute of Physics, 2005).

Edible water bottles are environmentally friendly. Notpla, the company that makes plant-based packaging say that it only takes four to six weeks to decompose and are non-toxic because they are made of plant material. According to the WWF, regular water bottles can take up to 450 years to decompose. Plastic is very bad when it gets into our ecosystem. Around the world, over 240 wildlife species have swallowed plastic which often results in injuries and death (WWF-Australia, 2018).

When talking about latex water balloons, some animals that are impacted by these types of balloons are birds, whales, sea turtles, bighorn sheep and other wild and domestic animals. An animal can starve after eating a balloon because it blocks it's intestines. Even though latex balloons may be marked as biodegradable they are full of chemicals and take many years to break down (Balloons Blow, 2012).

There is a difference between biodegradable material and compostable material. Biodegradables are often still plastic that have microorganisms added to break down the plastic. Compostables are made of natural plant materials, and do not produce any toxic material. Biodegradables get broken up into small pieces which can be hundreds (microplastics). It makes it extremely difficult to pick up and stays in the environment (Krosofsky, 2020). The edible water bottles are compostable and breakdown into organic material.

What effect do you think having edible water bottles of different sizes might have on their strength?

The polymer that is created will likely be stronger with a smaller amount of liquid inside. This is because as the volume of water increases the surface area tension would decrease.

I do not like water bottles of any type and do not think they are necessarily needed. However, in some applications (like the example of the marathon) where individual serving sizes are needed it is better than paper or plastic cups.

What impact do latex water balloons have on the environment and our water systems?

Latex balloons are very bad for the environment. They make their way into water systems and are swallowed by animals that can choke on them. The latex does degrade but it takes a very long time.  Plastic water bottles take even longer. It would be good to have an alternative that is compostable.

We also talked about experiment design and some ways to measure the strength of the edible water bottles.

Controlled variables: surface the bottle is dropped on, the kitchen scale and the plate to push down on it.

Dependant variables: the height they are dropped from to break. The grams on the scale measuring the weight placed on them.

Edible balloons- I can tell that the edible water balloons are a lot weaker than the latex. They did not pop but instead when they broke water would just leak out. I was able to drop the smaller ones from a higher distance without them breaking.

Latex water balloons - I had to use a bathroom scale to measure the weight pressing down because the kitchen scale range was too small. If I did not push enough then the balloons would go into a funny shape. 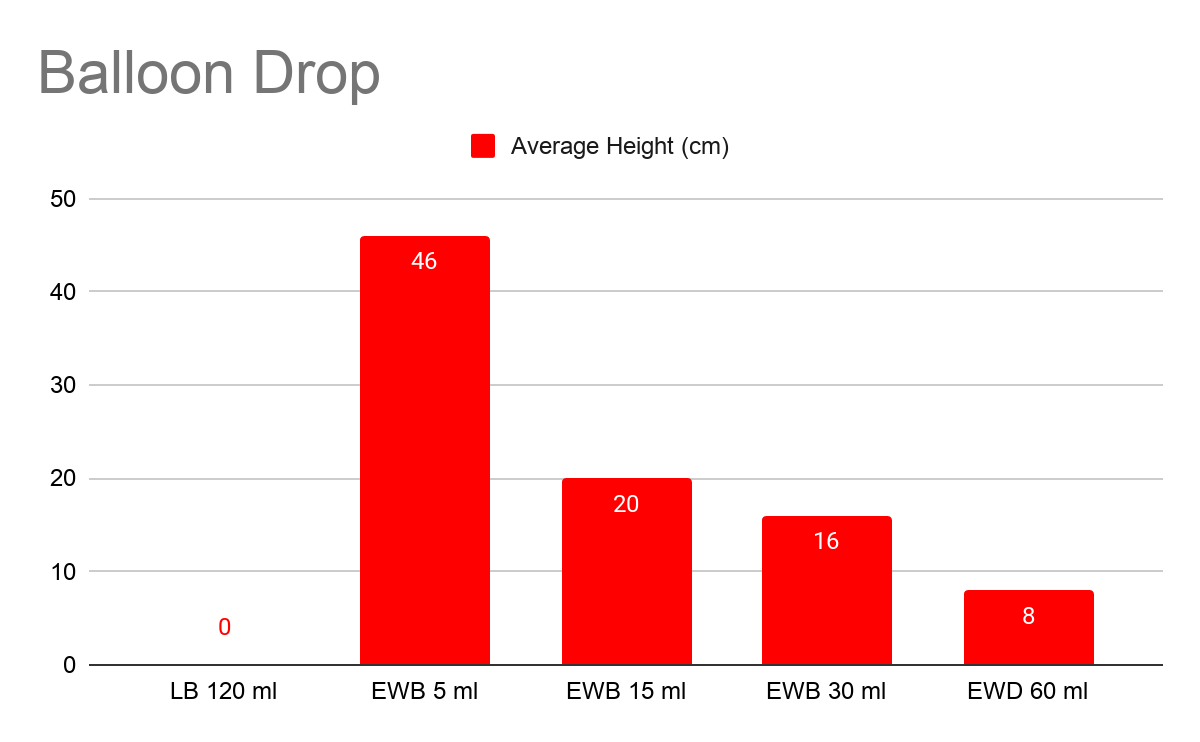 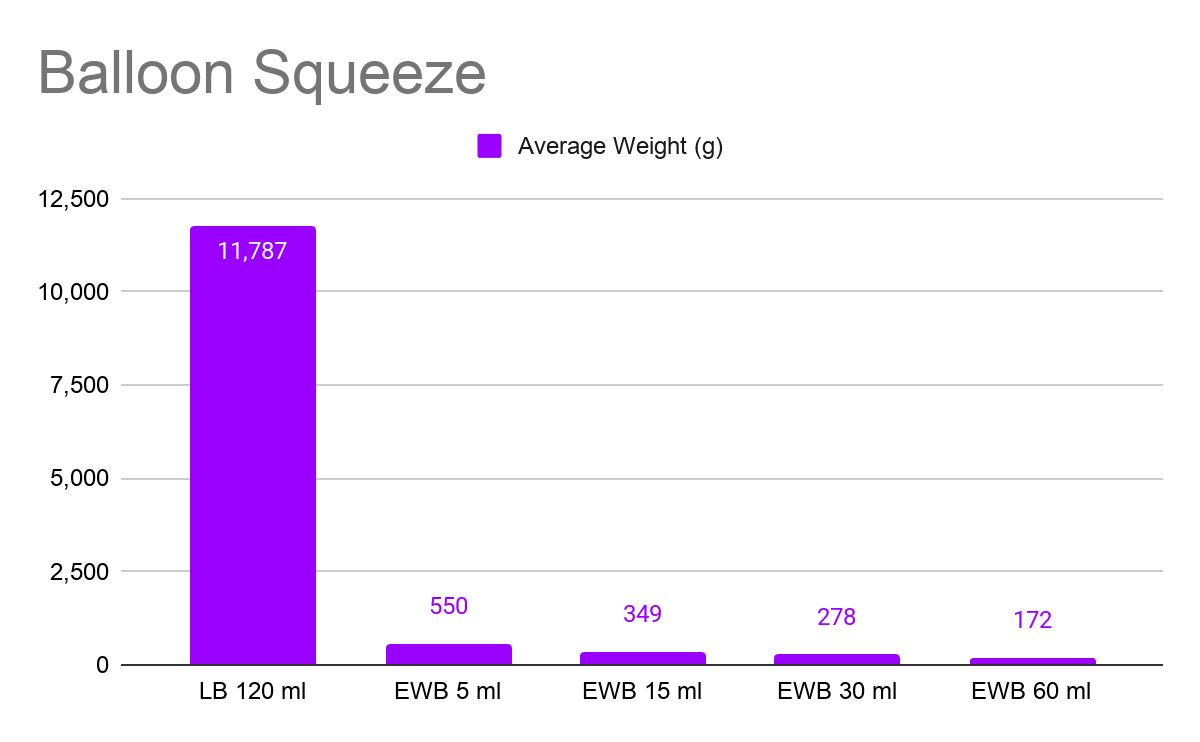 The larger the balloon the easier it broke. In the Balloon Squeeze test the smaller balloon also withstood more weight then the larger balloon. In my results the graphs show the difference between each size of balloon. The trend is that the smaller the balloon the more force it can handle.I think this is because the surface tension of the water is weakened when there is a higher volume of water which pushes harder against the algae shell.

In order for a larger edible water bottle to be used like a regular latex water balloon the shell would have to be stronger.

Could I use edible water bottles as water balloons?

I personally don't think that edible water bottles are able to be used as water balloons because the shell is too thin and the algae gel is very messy. I think with some more research I could develop a better, stronger plant based alternative to latex water balloons.

How are edible water bottles used now and how could they be used in the future?

According to Notpla, edible water bottles are used as portable water supplies for marathons to keep athletes well hydrated. They are also being developed for condiments (holding your ketchup or mustard at fast food restaurants). They can also hold other liquids like soap. It seems that the current issues with these types of plant-based packaging is their strength, capacity and storage.

If we used these instead of plastic packaging we could save the lives of animals and marine species across the globe, reduce the amount of plastic waste in oceans and landfills, and have packaging that is compostable and returns to the earth.

In my first trial - I  did not put enough Sodium Algainate in the mixture. I stirred the mixture for a lot less time than I had to and the balloons were weak.

I would like to thank Dr. Shawn Loo PhD for helping me in this project and giving me some vital information for the experiment. I would also like to thank my mom for buying all of the supplies needed.