Kids in my grade will fill out a quiz individually and then in a group. A boy group and a girl group. They are allowed to change and share answers with their friends. I'll collect results and see who changed answers and who was most affected by peers.

For my project I decided to uncover if gender affects peer pressure. I guess it was just something that’s always been at the back of my mind but I never thought I would be able to actually discover the truth.  When the opportunity of the science fair came up I originally wanted to do something that had to do with either gymnastics or flexibility because that’s what I spend most of my time on.  But when an article about peer pressure popped up on my screen I knew it would be perfect.  I then narrowed it down to gender and from there I decided exactly how I wanted to test it.

1. The first step you should do is design your quiz.  You need it to be on something that no one is better at then someone else.  (This is why I did mine on Favorites) Make sure to have the same amount of choices for each question as this will help later.

2. Before you get anyone to participate in your study, you must get them to fill out a consent form.  Make sure to include the risks, benefits and a detailed explanation of what exactly you will be doing. Make sure to keep track of whose you have gotten back.  If your volunteers are under 18, they must get it signed by an adult.  Make sure you have an equal number of girls and boys before you start testing.

3. Once you start receiving consent forms, you can start testing.  Find a room with no people (or limited) and get your volunteers to fill out the quiz on their own, one or two volunteers at a time.  You don’t want too many people in the room as that might make peer pressure.

4. Once everyone has already filled out the quiz on their own, put the results into a chart

5. Now separate your volunteers into a boy group and a girl group.  Choose one group to go first and get them to take the same quiz again.  Inform them they can change their answers from the first time. They will be allowed to talk as well as share answers.  Make sure to not influence either group by sharing your opinion as this is a source of error.

6. Now test the other group/gender and give them the same rules and guidelines.

7. Once everyone has been tested twice, put all your results into a table where you can compare everyone’s first test to their second test.

8. Tally how many people changed their answer on each question and add them up to get your total.

9. Now take the number of questions you have and multiply it by how many volunteers you have to get your “possible change”.

10. Next divide the total of answers that changed to the possible answers that could have changed. This should give you a percent. If you want no decimals then simply round either up or down.  Now that you have a percent you can see exactly which gender was more affected.  (in my case boys)

For my project I decided to uncover if gender affects peer pressure. I guess it was just something that’s always been at the back of my mind but I never thought I would be able to actually discover the truth.  When the opportunity of the science fair came up I originally wanted to do something that had to do with either gymnastics or flexibility because that’s what I spend most of my time on.  But when an article about peer pressure popped up on my screen I knew it would be perfect.  I then narrowed it down to gender and from there I decided exactly how I wanted to test it.  I decided on testing a group of kids from my grade.  I will most likely send them a form about their favorite things as then there is no right or wrong answer. They will first fill out the test on their own with no peer pressure and then I will put them all into groups; one group of all the boys and one of all the girls.  I will allow them to talk as well as change their answers so that peer pressure is on.

According to Oxford Languages, the definition of peer pressure is “influence from members of one's peer group.”

Once they all take both tests I will gather the results to see if boys or girls were more affected by their peers. Will the girls chat more and decide to change their answer based on what their friends are doing or will the boys decide to change their answers based on what their friends think?  I can tell if the boys or the girls were more affected by comparing both tests and seeing who changed their answers from the first quiz.  Or maybe gender doesn’t affect peer pressure at all and the results from the boys and the girls will show the same.

How The Variables Are Expected To Impact Outcome

Gender might affect who was affected by peer pressure and who changed their answers when they were surrounded by their peers.if one gender was affected more than the other, then the second tests from that gender will have some different answers than the first tests that gender submitted.

Direct peer pressure:  This isn’t necessarily unspoken or spoken.  This is when someone is put on the spot to make a decision such as if someone hands you something such as a cigar and you have to decide whether you’re going to take it or not. Another example could be if someone passes you a note during class and you have to decide whether you’re going to read it, write back or ignore it. -Indirect peer pressure: this is when someone might overhear something and then react to it.  No one is talking directly to them but instead they learn about something and react or respond to it.

My second fact is from www.sciencedaily.com. They say that according to recent studies, people take stupid chances much more when they are  in a group envirement then when they are alone.  They say this is because our brain takes more pleasure winning in a group setting than when you are alone.   My third and final fact is that peer pressure is most common during maturing ages.  I got this from  https://ppexhibition.weebly.com/ and https://www.ncbi.nlm.nih.gov/

From all of this I have concluded that there are six types of peer pressure, peer pressure is most common during puberty and that people take more value in winning when they are with a group.

The bar graph below shows how many girls changed their original choice to something else when filling it out with their friends. 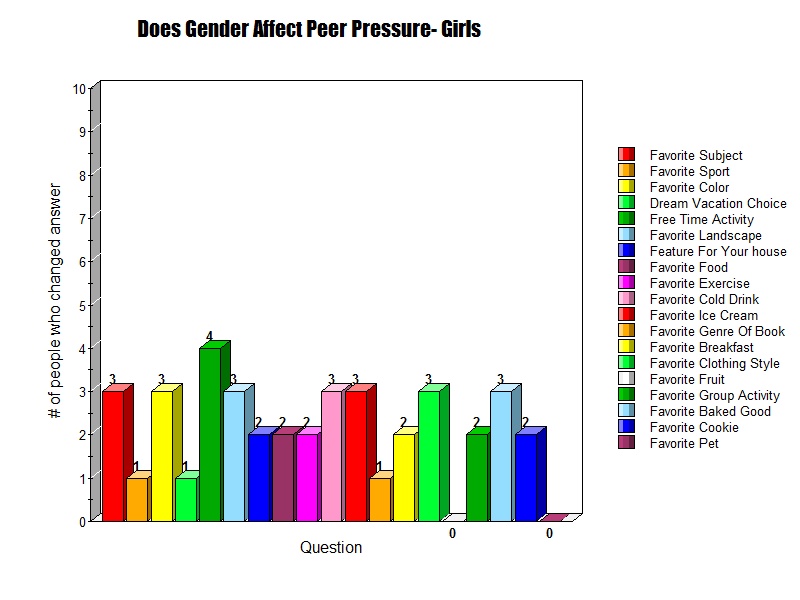 This second graph below shows how many boys changed their oringinal answer to something else when they were filling it out with their friends the second time.ggghhhjh 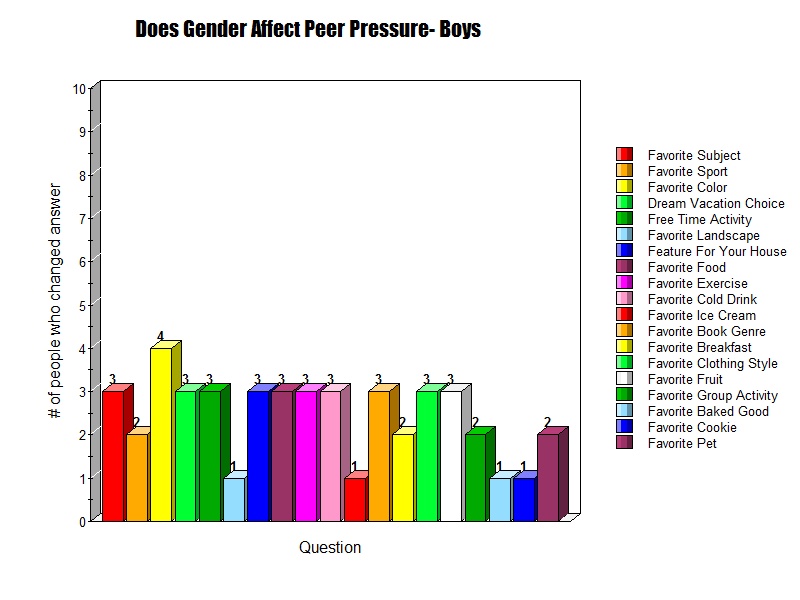 This next graph below is an overall summary of how many people changed their answers. 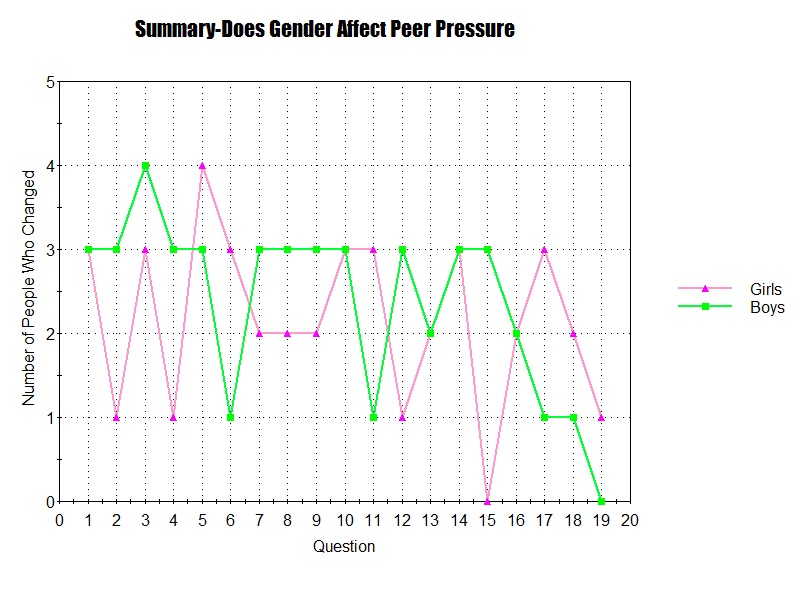 My inference is that males at the grade six level are more affected by peer pressure than females. My hypothesis was that females would be more affected by peer pressure but that was proven wrong.  The original reason I thought that is because more girls are at the maturing age while boys, not quite as many.  I now realize that the same reason I thought it would be girls who are more affected is what I think is the reason it's actually males who are more affected at this age. This might be because some females are past the stage of really caring what others think of them while males might still care. The data showed that 24% of males changed their original answer to something else during the test with their friends and the female data showed that 21% of females changed their original choice to something else when surrounded by their peers.

Wow! I have a lot of people to thank for this!  For one, without my Miss. Tung I wouldn't be here in the first place!  She made sure I wasn't too stressed as well as help answer my questions regarding the project.  Another two people I would like to thank are my parents.  Without them I'd probably be almost no where.  My dad helped me format my results so they were easy to read and my mom read over it with me.  Last but not least i'd like to thank all my volunteers who gave up some of their time to participate in this study.   I litteraly couldn't have done it without them!