Due to the fact that AD/HD symptoms often present differently in girls than in boys, they are often missed by standard diagnostic tools, leading to underdiagnosis.

Why are girls with AD/HD often underdiagnosed?

Attention Deficit Hyperactivity Disorder, or AD/HD is described in the DSM as: "Showing a persistent pattern of inattention and/or hyperactivity-impulsivity that interferes with functioning or development." (CDC, 2020)

3. How can AD/HD symptoms present differently in girls/boys?

Chances are when you think of someone with ADHD you think of someone with hyperactive, impulsive behaviours, but ADHD can actually present itself in a multitude of different ways. Just a few ways that ADHD may manifest in girls include tomboys, hyper-social girls, shy, withdrawn girls, and even bright, hyper-focused girls (Nadeau et. al., 24). As you can see, not everybody with ADHD falls under this common hyperactive stereotype.

“ADHD is more commonly diagnosed in young boys than girls, however research into ADHD in adulthood suggests an almost equal balance between men and women” (Collingwood, 2020).

Interestingly, ADHD is more commonly diagnosed in young boys than girls, however, research into ADHD in adulthood suggests an almost equal balance between men and women. This supports the idea, that many girls with AD/HD go undiagnosed until much later in life when they struggle to manage the demands of adulthood, and seek out help from a professional.

People with the inattentive type, predominantly girls tend to stay under the radar, and as a result, are very often not diagnosed. People have lots of false preconceptions about ADHD, such as that in order to have it, you have to be very fidgety and disrupt the class. Teachers and even parents often do not notice that a child has inattentive type ADHD. When a child is constantly running around the class, shouting out answers, and disrupting the class, it is brought to someone’s attention rather quickly, making it much easier and faster to diagnose. However, the inattentive type is much more of an internal battle. A child may be shy and timid, daydream in class, and have a hard time focusing and getting their work done efficiently. However, as they are quiet and not disrupting anyone they are often considered “model students” Even girls with hyperactive type ADHD tend to be better at hiding their symptoms, perhaps partially because ADHD traits, such as being more aggressive, loud, and assertive are more accepted and even praised in boy-to-boy interactions. Oftentimes young hyperactive girls will find that they have a much harder time fitting in with other girls and making friends, and as a result will try to hide and repress their symptoms. People often assume that you have to have bad grades in order to have ADHD. In fact, even some professionals will disregard struggling children if they seem to be “doing well” in school and will brush off a diagnosis, saying things like “come back if your failing school, then we can talk” In fact “many girls with ADHD may seem driven, anxious, or even over-focused on their studies. Their high grades often mask the extreme effort that has been required to achieve them. They may frequently study all night to prepare for exams or to complete papers, and may eventually hit a wall. Their hyper-focus on academics helps them to achieve, but at a very high cost. They often socialize very little, and may continue to socially isolate themselves throughout university, unable to balance their academic pursuits with their social and recreational activities.” (Nadeau et. al., 26) Gifted girls have a particularly hard time getting diagnosed, and often never end up with a diagnosis, as their struggles can be easily masked by their good grades.

5. Why does getting diagnosed matter?

If you have ADHD, getting diagnosed can be crucial to finding success in life, and living up to your full potential, and the earlier the better. With a diagnosis, you gain access to many resources such as medication, accommodations in school, and therapy, which can help you find strategies to help manage day-to-day struggles (Nadeau et. al., 172). Most importantly, it can give people a feeling of being understood.

Many other women with AD/HD have previously been diagnosed with Anxiety, OCD, and eating disorders. While these conditions are real and must be addressed, undiagnosed AD/HD is often an underlying cause. Going undiagnosed also puts people with AD/HD at a higher risk for substance abuse. People with AD/HD are already at a greater risk for addiction, and before having access to the proper resources, people may turn to alcohol or drugs in an attempt to self-medicate.

6. What needs to change? 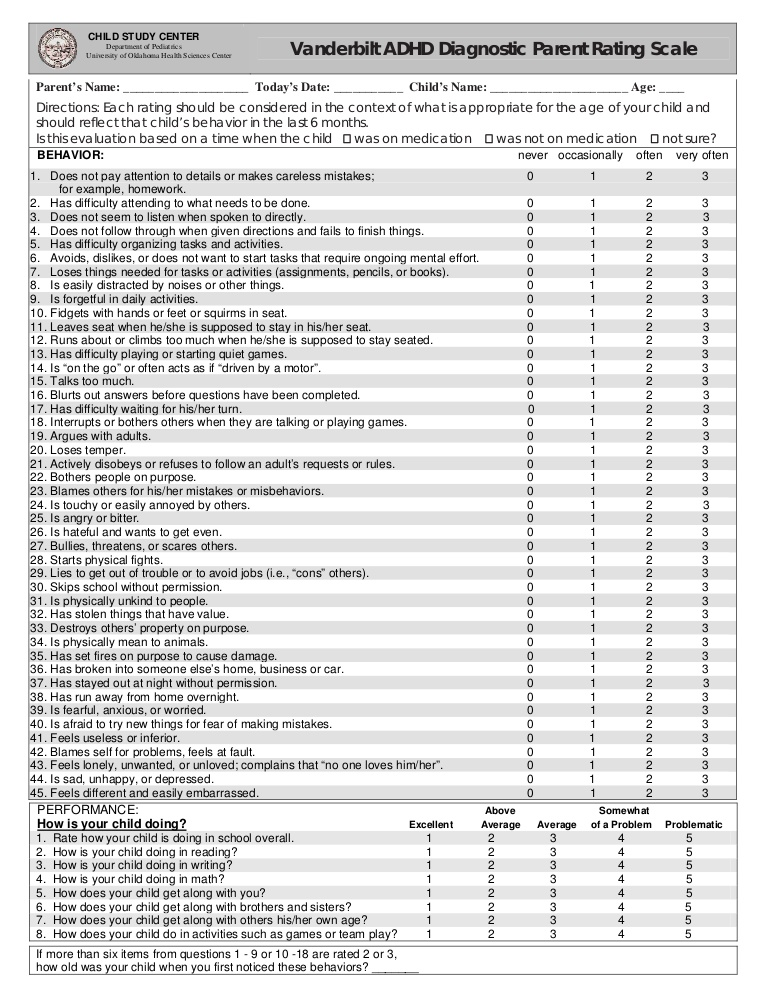 The Vanderbilt ADHD Diagnostic Parent Rating Scale is a common test used to diagnose children with ADHD. Many diagnostic tools seem to portray people with ADHD as angry, malicious people:

People with ADHD may sometimes have symptoms like this, however, ADHD can present itself in a multitude of different ways. In fact most tests and questionnaires used to diagnose people with ADHD are heavily focused on the hyperactive type, with only a few questions regarding the inattentive component. This means that often people with inattentive symptoms, typically girls, are not even considered to have ADHD when in reality they are still struggling. This is a large part of the reason why many girls with ADHD are diagnosed so much later than boys, if ever. Also “Many ADHD symptoms that girls experience are internal, and therefore not observable by others. Most ADHD rating scales focus primarily on these observable behaviours as reported by others, mainly parents and teachers. Because so many of these experiences are internalized in girls, we can only become fully aware of them by asking them directly” (Nadeau et. al., 88) While there are still many problems in ADHD diagnostics, there are new tests being developed to cover a more inclusive, wider range of ADHD symptoms, including those more common in girls.

Many people are still misinformed about what ADHD is, and what it can look like.

Oftentimes parents may not even notice that their child has ADHD, or at least not until they start having more serious problems.

Teachers also may miss students, especially girls, who are not disruptive in class, but are quietly struggling to pay attention.

Even some psychologists and pediatricians have a hard time recognizing inattentive type ADHD, as they often rely solely on the rating scales, which are very much focused on hyperactive behaviours typical for ADHD boys. There is a need for more education and awareness for both parents, teachers, and medical professionals so that we can continue to have more and more girls diagnosed and supported as early as possible.

In order to make a difference in the life of so many girls struggling with AD/HD we must all be willing to change our mindset, and look beyond stereotypes in our society. All people, children, and girls with ADHD are different, and they should all be given equal opportunity to thrive! We should work to encourage and support all their unique needs and personalities.

My research supports my thesis, showing that AD/HD symptoms presenting differently in girls than in boys, combined with the use of outdated and incomprehensive diagnostic tools have led to an underdiagnosis of AD/HD in girls.

Unfortunately, there are few resources available regarding this topic. However, one source I found particularly compelling is a book entitled, “Understanding Girls With AD/HD" by Kathleen Nadeau and others. Not only was it a source of inspiration for this project, but it also encouraged me to seek an ADHD diagnosis in the first place. If you'd like to learn more about girls with AD/HD, I’d highly recommend checking it out!

I'd also like to thank my parents for always encouraging and supporting me, as well as my science fair coordinator, Ms. Lai, for instilling in me a passion for science and the pursuit of knowledge.