Which Type of Popcorn Pops the Most Kernels

The focus of this experiment will be to see which type of popcorn brand pops the least amount of unpopped kernels. Some previous work on this topic has shown that many popcorn brands have a lot of kernels in the bag that don’t pop. There are about 460 kernels in a regular popcorn bag, but about 50-100 don’t pop. Orville Redenbacher popcorn had an average of 80% of popcorn kernels popped when put in the microwave for 1 minute 30 seconds. The reason why popcorn pops is because of the water trapped inside the kernel. If the kernel is heated at the right temperature, then the water will turn into steam. Due to the hard shell, it makes it hard for liquid and air to pass through, the steam has nowhere to go, thus resulting in a buildup of pressure in the kernel. Once the pressure is high enough and the temperature reaches about 180 degrees celsius, the kernel bursts, and the popcorn is turned inside out. The popcorn is whitish-yellow not because of the butter or flavour put into it, but because of the starch inside the kernel. At higher temperatures, the starch gelatinizes and then expands with a burst of the kernel. Once it cools down, the flake that we know as popcorn is formed. Microwaves give off a high-power electromagnetic wave into your food. It’s the same type of wave that is in wifi connections, but it’s at a much higher power level. The microwave is shielded so that the waves don’t leave the microwave. These waves consist of a rapidly changing electric and magnetic field. Most materials will absorb some energy from the radio waves, but anything with water in it will absorb a lot of energy because water is a polar molecule, so the molecules are easily pushed around by the swiftly changing electric field. Heat is just a random motion and vibration of atoms in something, so when it is pushed around by the wave it heats up. To best understand this experiment some key concepts and definitions to know include, Physics: The part of science connected with the nature of matter and energy. This subject includes mechanics, heat, light and other radiation, sound, magnetism, and the structure of atoms. Gases: A state of matter which allows molecules to move freely without being in a fixed shape nor fixed volume. A gas substance cannot be liquified by just the use of pressure alone. Plant science: The science behind plants. Plant science is also called botany, plant biology, or phytology. It is the science of plant life and biology.  Lastly, food science: The basic science behind the food. Food science starts with agricultural science and nutrition, then leads through the scientific aspects of food safety and processing, notifying the making of food technology.

Controlled Variable: The time that I keep the bag of popcorn in the microwave and the microwave. Also, the person that is counting stays the same.

Uncontrolled Variable: The humidity of the air and the air pressure. 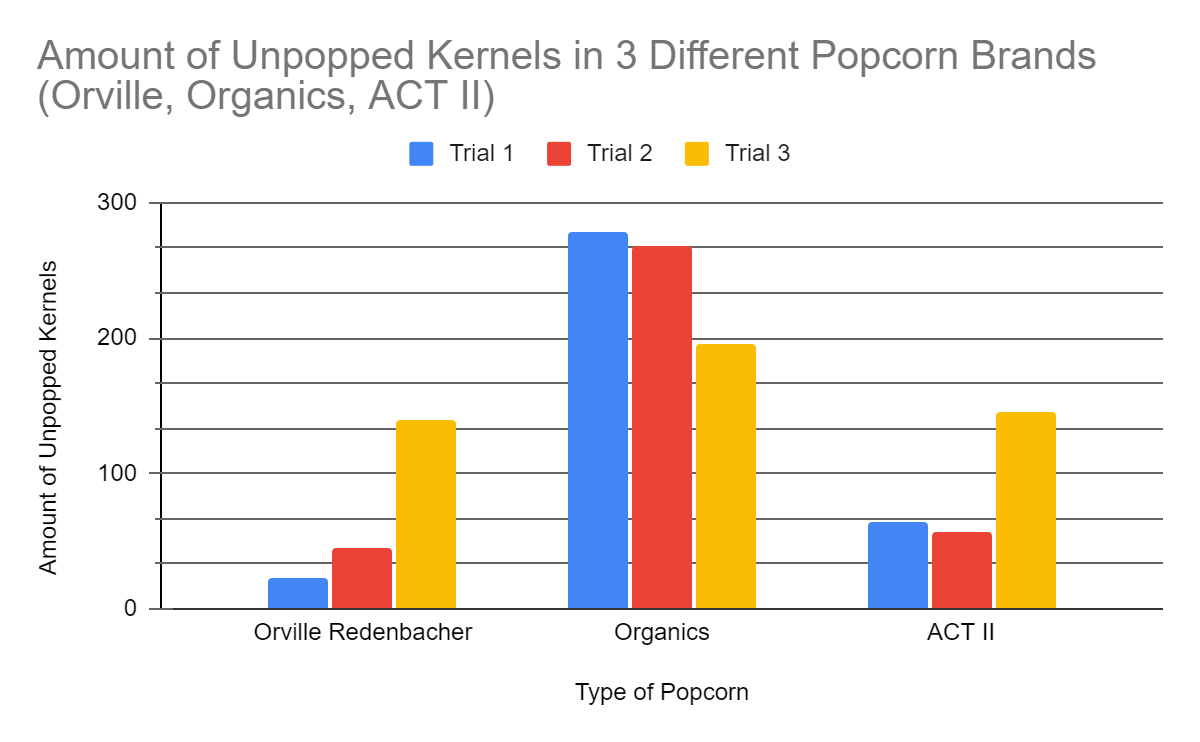 This science fair project could have been improved by doing the project in 1 day because the project was done in 3 days as I was unable to do it in 1 day. This affected my experiment because the air pressure and humidity changed during the 3 days which affected how many kernels were popped. This is also why in trial 3 the results were a lot more different than the results in trial 1. Variables like the time that I kept the popcorn could have also been better controlled because once the popcorn was done I was getting the bowl which led to about an extra 15-30 seconds of the popcorn staying in the microwave. This could have let the popcorn absorb extra heat which affected my results. Other errors that could have been eliminated or reduced include having a larger sample size because there could have been variations that were not represented in the experiment.

I am acknowledging my teacher Mr. Daniel VanDrunen for helping me during my science fair. He helped me figure out what to do and he looked over my work. Thank you, Mr.VanDrunen